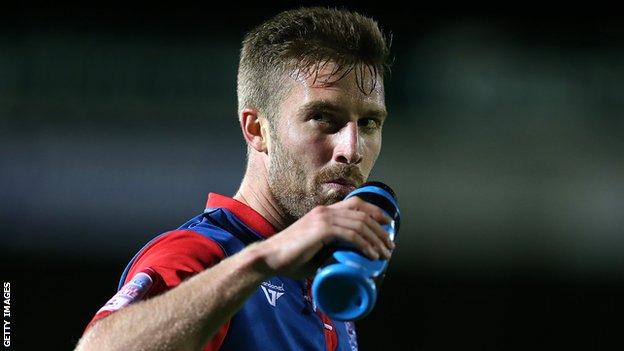 Gillingham defender Matt Fish says the team could miss out on promotion if they become complacent.

The Gills have slipped from the top of League Two but remain eight points ahead of fourth-placed Burton.

Fish told BBC Radio Kent: "Below fourth it is quite tight so we can't get complacent and think we are already promoted or in the top three.

"We need to win as many games as we can. If we can win half of our games we will be there or thereabouts."

Gillingham face trips to Bradford and York in their next two games but the 23-year-old says their form away from Priestfield has been a bonus this season.

The Kent club have lost five league games at home but only been beaten once on their travels in 2012-13.

"Our away record has been second to none so we have confidence going into both these away games," Fish continued.

"I try not to think about why our home form is not as good as our away form - it's hard to put your finger on it. Maybe it's a little bit of pressure at home but I'm not sure.

"We are still in a great position to get promoted as long as we keep doing what we are doing."

The former Dover right-back's form this season, scoring twice in 34 appearances, led to him signing an extension to his contract.

"At the start of the season I was doing well and I had a little bit of a dip and the gaffer left me out," he added.

"That gave me a bit of a kick and I feel good and sharp lately. I feel I have been consistent, I've just got to keep it going and keep improving."