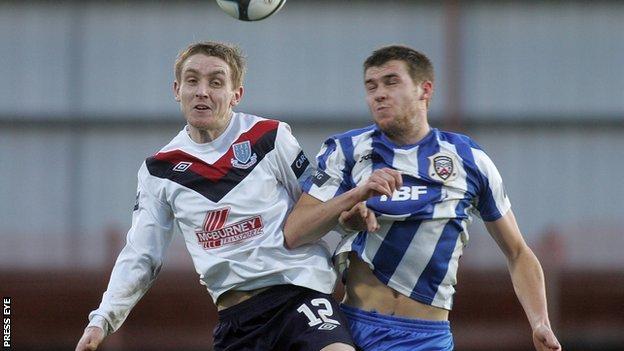 Kearney's men crashed to Premiership leaders Cliftonville 5-0 on Tuesday and the Bannsiders boss says that result will have boosted the Sky Blues' hopes.

"Neither team should require motivation for this one," said Kearney.

"But I am sure Ballymena will be rubbing their hands in anticipation after our result at Solitude."

However, Ballymena will have to do without key attacking midfielder David Cushley as he has been suspended for two matches after picking up 10 yellows cards this season.

Cushley scored the goals as the County Antrim Shield winners fought back from two down to grab at 2-2 draw away to Linfield last Saturday and his absence is a definite blow to United boss Glenn Ferguson.

Coleraine, on the other hand, are boosted by the return of talented midfield man Stephen Lowry, a former Ballymena player, who missed the defeat at Cliftonville because of suspension.

Ballymena need to beat Coleraine for the first time in 12 meetings if they are to progress to the quarter-finals of a competition they last won in 1989.

Indeed, Kearney has not been on the losing end of a derby fixture since taking over as Coleraine manager two years ago.

Ballymena's last win over Coleraine was in October 2009 when a Howard Beverland own goal gave them a 3-2 victory.

"It is a massive game and a competition we would love to do really well in," said Kearney.

"It is 10 years since Coleraine last won it by beating Glentoran in the final. It was good to us then, but has not been so kind to us in recent seasons."

Elsewhere, last season's beaten finalists Crusaders, having knocked out holders Linfield in the fifth round, are at home to Glenavon.

That replay win over the Blues proved to be goalkeeper Craig Hyland's only game for the Crues as he was released this week because of problems over travelling arrangements.

The only other all-Premiership match sees runaway Premiership leaders Cliftonville at home to Donegal Celtic.

Tommy Breslin's Reds already have the League Cup secured and, with a 12-point lead in the Premiership, the domestic treble must be a realistic target.

Portadown are up against Championship One leaders Ards, while the Premiership's bottom club Lisburn Distillery are at home to Dundela.

"Our game is being tipped as a possible upset - but remember Lisburn Distillery are the senior club," said Duns midfielder Willie Faulkner, recently named Championship player of the month.

"If we can keep it tight at 0-0 and then get a goal, maybe their heads will drop because of the way they have been going this season.

Glentoran, desperate for a good cup run, are away to Championship side Bangor.