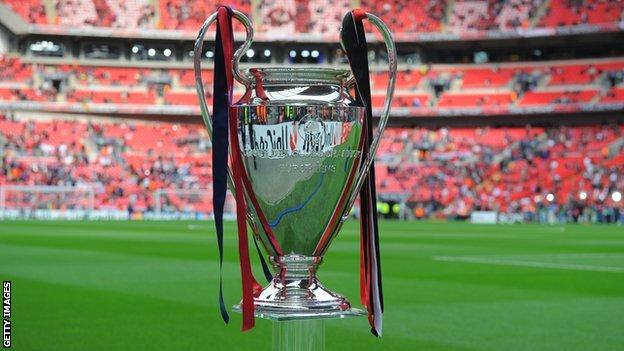 Uefa has responded to growing concerns over the high cost of watching football in England by reducing the cheapest ticket for this year's Champions League final at Wembley to £68.

European football's governing body was accused of exploiting supporters when the match was last staged in London two years ago - Barcelona beat Manchester United 3-1 - by charging a total of £176 for the cheapest neutral ticket.

Fans will pay £60 for the lowest-priced individual tickets, although the cost comes to £68 once £8 of administration and postage charges are added.

How the costs break down

Uefa announced on Friday that it has listened to that criticism and lowered prices for the showpiece match, which takes place on 25 May, after consulting football fans across Europe.

"It is correct we should give the opportunity to everyone to go to the match irrespective of their financial conditions," a spokesman said.

But many supporters may still view the entry level price of almost £70 as too high - even for what is arguably the biggest game of the season.

And some fans may still question why 20,000 seats are not being put on sale to the general public. Uefa hold back these tickets for sponsors, commercial partners and officials and administrators from European and world football.

Uefa's response is nevertheless a sign that football's authorities may be aware of the increased sensitivity around the cost of watching football - particularly in England where some Premier League clubs have been accused of ripping off away supporters.

In January, Manchester City fans returned nearly a third of the ticket allocation for their game at Arsenal, saying the £62 price was too high.

Supporters groups have warned the Premier League it risks alienating a generation of fans by charging too much to watch games.

The Premier League says it cannot tell clubs to reduce prices but argues many have become more sophisticated over the past decade, introducing stretched ticketing policies where higher-priced tickets help subsidise more cheaper tickets for fans on lower incomes.

Despite that, some campaigners want to see a greater commitment to reduce prices especially at a time when Premier League clubs are poised to see a huge increase in income thanks to the competition's new improved TV rights deals, which take effect from this August.

Ticket prices for the Uefa Women's Champions League Final at Stamford Bridge on 23 May will be priced at £10 for adults, or £5 for under 18s and over 65s. Ticket packages for disabled supporters include a free seat for an accompanying person.

224 comments
Back to top
unknown