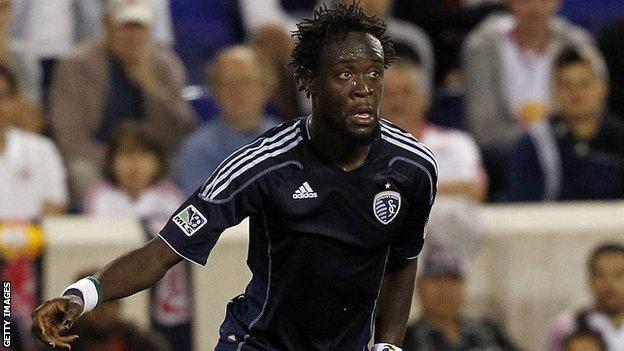 The 28-year-old, who is has not played a competitive game since November.

"We have to make sure what we do with him is right," said Hughton.

"We've brought him in to help us for the rest of the season, not just in the next game or so."

Kamara is available to face Fulham this weekend after receiving clearance to play from the UK Border Agency.

The Sierra Leone forward's last appearance for Kansas came in an MLS play-off match three months ago and he had only recently returned to pre-season training for the American club.

But he linked up with his new team-mates for the first time on Thursday at Norwich's Colney training ground.

"That was his first training session with us," said Hughton. "He arrived in the early hours of Wednesday morning, so he wasn't able to do too much then.

"His mindset is very good. He wants to come here and he wants to make an impact. That's why we brought him over and that's what we would like him to do.

"What we need to assess is exactly where he is at the moment. He's on the back of a break in MLS. He of course has not played the number of games we would have liked the last few weeks.

"That's not always necessary. Players will do that in a pre-season and go straight into games."

Kamara has scored 31 goals in his three years at Kansas, often playing in a wide forward role, as well as in the centre of attack.

Hughton added: "Am I tying him down to a position? I'd say no. I probably will continue to see him as someone who can give us options right across that forward line."