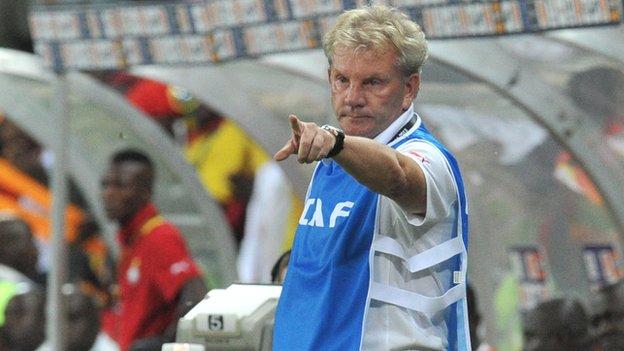 A Burkina Faso victory in Sunday's final against Nigeria would prove a second straight Africa Cup of Nations fairytale - but Belgian coach Paul Put simply hopes it can mark his redemption back home.

For the 56-year-old may not have ventured into the African game were it not for the ban he received in Belgium following his implication in a match-fixing scandal.

The former Lierse coach received a three-year ban from the Belgian FA (RBFA) following allegations the side had taken money from a Chinese betting syndicate to lose matches under his tenure in 2004-05.

Now everybody in Belgium is calling me - radio programmes, television programmes - but I'm still the same Paul Put as before

The man who has guided the rank outsiders to their first Nations Cup final says he was made a scapegoat by Belgian football for what was a widespread problem. He also claims he was acting under duress after being threatened by those leading the scam.

"I was threatened by the mafia," Put told reporters this week. "My child was not safe.

"Fixing games is a big word. The team at that moment had nothing. It was in a very bad condition. It was not by our will."

In the coming months, a criminal trial in Belgium is set to open against Put and others allegedly involved in what became known as the 'Ye scandal' following the alleged involvement of Chinese businessman Ye Zheyun.

But regardless of what is found, there are those at home who wonder whether a coach who took his first job in Africa with The Gambia (2007-2011) before moving to Burkina Faso will ever be accepted back home.

"His work at the Nations Cup is doing him a great deal of good," says journalist Christophe Clement, who works for the VRT television network that broke the story of Belgian football's match-fixing problem in 2006.

"Maybe for him it's not revenge but more a feeling that he is still a good coach, that his days are not necessarily over and that he can still do good things if a Belgian club is interested in him.

"But his reputation counts against him and I am not sure whether any Belgian team would ever dare to employ him, because of the controversy.

"If he did take charge and there was a strange goal or incident, I think fans might look at Put and wonder if anything had changed."

Meanwhile, Rene Verstringhe - who worked as the RBFA's lawyer for 18 years before stepping down in 2012 - says that although Put's official ban may have ended, he will still need football authorities to accept his return.

"If he wants to work in Belgium again, he will need a licence from the FA - and that is the problem now," the retiree told BBC Sport.

"If the FA says that it is good that he has started as a trainer again - then the (affair) is over.

"But if they say they don't want a trainer in Belgium who is ready to deal with the mafia or the likes of Ye, they will say he does not deserve a licence to train there."

Nonetheless, Put is beginning to believe that his stunning achievements with Burkina Faso may be enough to prompt a club at home to give him a second chance.

"Now everybody in Belgium is calling me - radio, television programmes - but I'm still the same Paul Put as before," he said earlier this week.

He has certainly proven his managerial worth in some style.

Prior to these finals, Burkina Faso had never won a match away from home soil at the Nations Cup - with the Stallions having reached the semis when hosting in 1998 but having failed, either side, to earn a victory during any of their seven previous campaigns.

In fact, their record was so poor that they had lost 16 - and drawn just four - of their 20 matches while travelling to the Nations Cup.

This year's campaign was seemingly set to follow similar fashion until Alain Traore struck a stoppage-time equaliser against Nigeria to earn a 1-1 draw in the eventual finalists' opening Group C game.

Then, against Ethiopia in Nelspruit, the long-awaited victory came - with a 4-0 thumping that was made all the more notable given that three of the goals came after the Burkinabe had been reduced to ten men.

Having held defending champions Zambia in their final group game, Burkina Faso - who are ranked 92nd by Fifa, below China, Guatemala and Cuba - arrived at their first final after beating Togo in the quarters before stunning Ghana on penalties in the semi-final.

Put managed to effect this remarkable transformation by not only organising his team well, having made them a well-structured unit (just as he did with The Gambia), but by also working on the players' psychology.

"Before we left Ouagadougou, I told the players that there are surprises at every tournament," Put said after the victory over Ghana's Black Stars.

"I made a compilation video showing Greece winning the 2004 European Championships, Chelsea winning the (2012) Champions League - no one expected that - and then Zambia's Nations Cup triumph last year too.

"So I told the players that everything is possible in football."

Victory on Sunday would prove that once again - but could also do so later down the line were Put to ultimately succeed in his mission to be allowed to coach back home again.