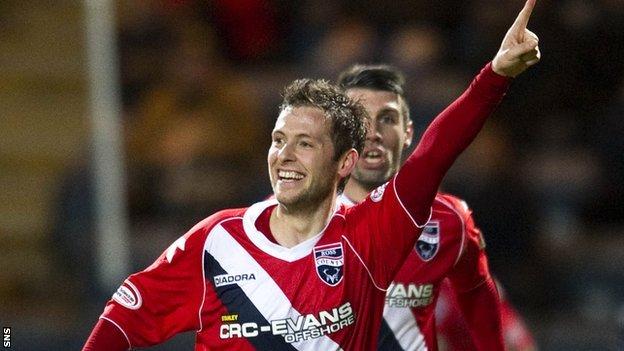 The Dingwall side are in their first season in the Scottish Premier League and look certain to achieve their aim of avoiding relegation.

"We knew if we won tonight we'd be five points off second place and 18 points off bottom," Adams told BBC Scotland.

"The top six is a possibility. The better we do, it could become reality."

Adams, watched his team have the upper hand in the first half at Dens Park, with Rab Douglas by far the busier goalkeeper, saving from, among others, Mihael Kovacevic and Sam Morrow.

There are a lot of bigger clubs in the Premier League, with a lot of history, but we are an up-and-coming club that has good foundations

However, Dundee and County were level at the interval and the match seemed to be heading for stalemate until Paul Lawson scored his first goal of the season with 10 minutes remaining.

His rifled shot from the edge of the box came down off the crossbar and was judged to have crossed the line.

Gary Glen controlled Mark Brown's long kick-out in injury-time to move away from on-rushing keeper Douglas and knock the ball home to seal the points.

Television replays of Lawson's goal were inconclusive, but the County boss was in no doubt the correct decision was made.

"The television pictures have told us tell us that it was over the line," he said.

"We hit the woodwork a couple of times and we worked Rab Douglas more than Dundee have worked Mark Brown so overall I think we deserved to win tonight.

"We have moved to equal on points with Aberdeen. We have gone above Dundee United, Hearts and Kilmarnock tonight.

"For us in our first season in the SPL we have acquitted ourselves exceptionally well.

"There are a lot of bigger clubs in the Premier League, with a lot of history, but we are an up-and-coming club that has good foundations."

County now have 32 points from 25 games, while Dundee languish on 14 points, meaning it is almost certain that Adams' side will not be making a swift return to the First Division.

"We all always complain that we don't have the resources, all us managers, but we have very good players and plenty of organisation and they have a great willingness to do well," said the proud Dingwall boss.

"It's do with passing and keeping the ball. It's [the training routine] probably a wee bit military.

"We want to improve and to do that we need to have repetition. We should be doing it at a younger age.

"At the start of the season we wanted to stay in the SPL and that is still our aim."