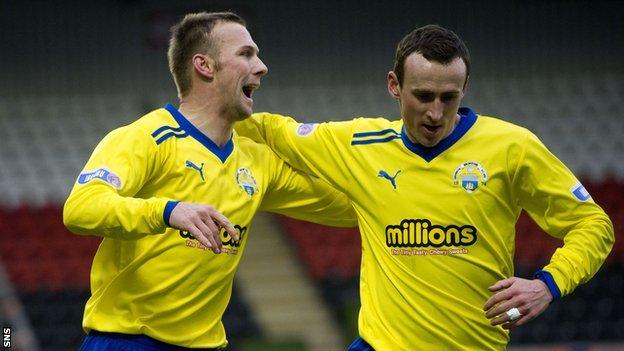 Morton extended their lead at the top of the Scottish First Division as they beat basement club Airdrie.

The visitors took the lead in the 24th minute when David O'Brien found the bottom corner of the net from the middle of the penalty area after good work from Peter MacDonald in the box.

Allan Moore's men then doubled their lead when Colin McMenamin stroked home from 10 yards out on the brink of half time.

Morton flew out of the blocks in the second half and it was not long before Peter MacDonald made it 3-0, scoring from 12 yards in the 52nd minute.

Kyle Wilkie made it 4-0 eight minutes later when he got on the end of Scott Taggart's pass to fire in from the middle of the area.

The Ton now lead the First Division by eight points but second-place Partick Thistle have three games in hand.

Dunfermline, in third, are a point behind the Jags and have played one game fewer than Morton.