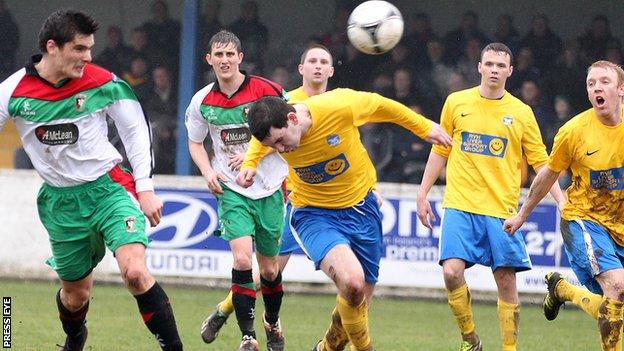 Glentoran came from two goals down to beat Championship One side Bangor 5-2 in the sixth round of the Irish Cup.

In other games, Amateur League club Kilmore Rec progressed to the quarter-finals by beating Institute 2-0 and Portadown edged a 1-0 win over Ards.

Knockbreda beat fellow Championship Two team Lurgan Celtic 3-0 and their reward is a home match against Glentoran on Saturday, 2 March.

The Glens will be relieved to have got through after a poor start at Bangor.

The Seasiders took the lead in the third minute through a Thomas Lambe header from Andy Morrow's cross and Michael Doran made it 2-0 after Ryan Mann's ball in.

However, the Glens hit back with three quickfire goals.

Bangor claimed Glentoran's third should not have counted as a Colin Nixon's header off the crossbar was adjudged to have just crossed the line.

In the second half, Marcus Kane fired in a long-range fourth and David Howland made it 5-2 to the Premiership side.

Kilmore Rec, from Crossgar, secured a deserved win away to Championship One club Institute.

Stephen Douglas made it 2-0 just before half-time with a penalty after Telford was brought down by Graham Taylor who was sent-off by referee Tim Marshall.

Institute were reduced to nine men when John Curran was red-carded for a rash challenge on Telford.

Aaron Walsh hit the bar for Institute and Kilmore's Johnny Cheevers was dismissed for picking up a second yellow card.

After the goals, Celtic had Nial Lavery and Shannon Drainey sent-off.