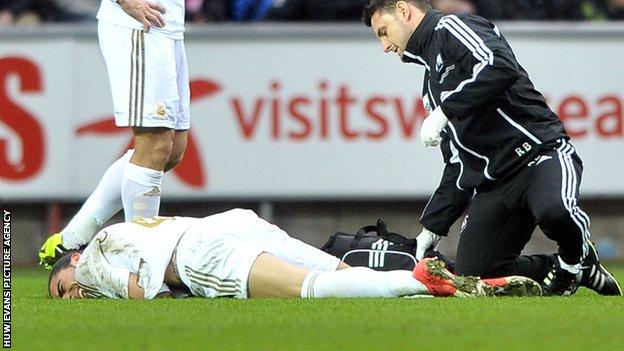 Swansea defender Chico Flores is set to miss their Capital One Cup final after rupturing ankle ligaments during the 4-1 home win over Queen's Park Rangers.

The Spanish centre-half was taken off on a stretcher after 34 minutes and a scan later revealed ligament damage.

Flores is now likely to miss the Premier League clash with Liverpool on 17 February and the Wembley clash with Bradford the following Sunday.

"It's difficult at the moment to assess how long he will be out because we need the swelling to go down first,'' added Rees in a statement on the Swansea website.

Flores travelled to Dubai on Sunday morning with the rest of the squad who have travelled for warm weather training.

The Spaniard will receive treatment from the club's medical staff in Dubai before a timescale for his comeback is confirmed.

The 25-year-old has established himself as a regular alongside Ashley Williams in the heart of Swansea's defence this season.

Flores was Laudrup's first signing as Swansea manager when he joined from Genoa for an for an initial £2m in July 2012.

Swansea manager Michael Laudrup described Swansea's win over Harry Redknapp's side in which they completed a league double as "excellent" as his side edged every closer to the 40-point mark.

The Swans moved up to seventh in the Premier League, three points shy of 40 points.

Michu, troubled in recent weeks by a tight hamstring, was taken off as a precautionary measure with 10 minutes remaining.

"Overall it was a great performance, a performance we needed right now to get even closer to those 40 points that we want," Laudrup said.

"We're very close now. We know that the next game next Sunday away to Liverpool at Anfield will be a very difficult game for us so today was important."