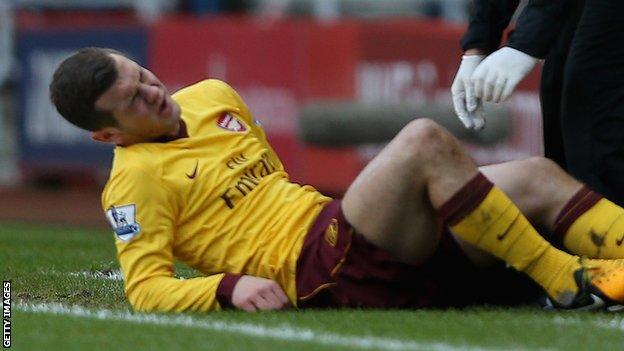 Arsenal boss Arsene Wenger says he is unhappy with some of the tackles made by Sunderland players after midfielder Jack Wilshere's injury scare.

Wilshere, who returned from a lengthy ankle injury in October, limped out of after colliding with Alfred N'Diaye.

Wenger believes referee Anthony Taylor should have clamped down on Sunderland for some challenges on the 21-year-old.

"Taylor let two or three things go that I thought were fouls on Jack," he said.

"I was a bit frustrated because I thought many times he didn't get the free-kick he deserved."

Despite failing to finish the Sunderland match, England international Wilshere is expected to be available for Arsenal's FA Cup fifth-round home tie with Blackburn Rovers on 16 February as well as the Champions League last-16 first-leg tie with Bayern Munich at Emirates Stadium on 19 February.

Referee Taylor booked five players and sent off Arsenal defender Carl Jenkinson during the game at the Stadium of Light.

"I just want the referee to give a foul when it's a foul. I don't want any special protection," added Wenger.

"The referee is not a bodyguard, he is just a referee and you want him just to give a foul when it's a foul."

Wilshere limped off after 50 minutes following a collision with Frenchman N'Diaye, although Wenger did not believe his player, who starred in England's 2-1 friendly victory over Brazil in midweek, had been singled out for special attention.

He said: "When you have the midfield we have - Santi Cazorla, Wilshere, Mikel Arteta, Aaron Ramsey - they won't stop us from playing.

"They try to stop us from combining and playing, so they get close to us."

Wenger had revealed in the build-up to Saturday's match that Wilshere would have to be carefully managed to prevent him burning out.