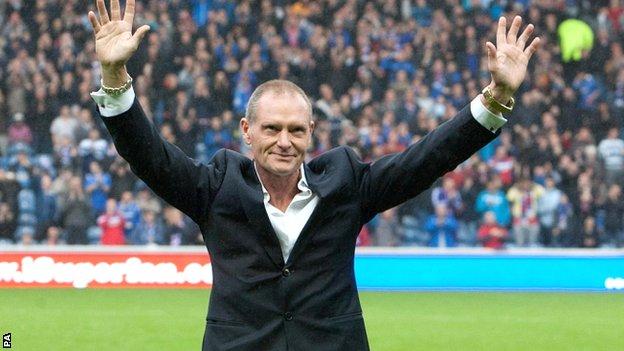 Paul Gascoigne's therapist says there are no fears for the former England player's life after he was placed in intensive care in the United States.

Ex-Newcastle, Tottenham and England star Gascoigne, 45, was transferred to hospital after suffering a bad reaction while being treated for alcohol addiction in Arizona.

But his long-term psychotherapist Dr John McKeown played down any fears.

"The hospital has reassured me that he is up and about walking," he said.

Dr McKeown, who has worked with Gascoigne for more than 10 years, added: "Paul has experienced severe complications with his detoxification.

"This is not unusual for someone who has been drinking as heavily as he has.

"Paul was transferred from the US Clinic Cottonwood to a local hospital to be monitored so as to be completely satisfied that there are no other complications to his health.

"There are no fears for his life. We will aim to keep everyone concerned updated on a regular basis."

Gascoigne's former captain at Spurs, Gary Mabbutt, told BBC Sport that he could be discharged in "the next day or two".

"He was put in intensive care where they monitored him," said Mabbutt. "But it wasn't a life-threatening situation and he's now in recovery. He will hopefully be leaving hospital in the next day or two and returning to the clinic to carry on the treatment to his problems."

Paul Spanjar, treatment director at the Providence Project rehab facility in Bournemouth where Gascoigne has been treated previously, says that there is a "slight overreaction" to the news that the former player was placed in intensive care.

"I wouldn't have seen it as a breakdown in his recovery and in fact sometimes this process is quite normal in the early stages of detox from alcohol," Spanjar told BBC Radio 5 live.

"I was with Paul on the Monday that he flew to Arizona and his health was very poor. He was physically dependant on alcohol and the detox procedure can be quite complex.

"Everybody can experience different withdrawal symptoms but hallucinations, shaking, sweating, insomnia, anxiety, paranoia, an inability to process any food - it heightens these sort of sensitivities.

"Paul has a very severe dependency and will have been experiencing lots of these types of symptoms."

Spanjar added that Gascoigne's recovery process had only just begun.

"It's very early days, " he said. "I think it's important to say that rehab is not actually the cure or the answer but the first step to recovery.

"Paul's journey is only just beginning and it certainly won't be finished when he completes treatment.

"His rehab journey will consist of various therapies essentially addressing both his alcoholism and the underlying attached issues that cause him to do some of the things he does, dealing with some of the resulting consequences and putting a really clear relapse prevention plan in place to help him cope upon his exit from treatment."

Spanjar explained why he felt it necessary for Gascoigne to fly to the United States.

He said: "The decision to go abroad was very much based upon some of the media frenzy in the UK.

"It would have been very difficult for Paul to continue with his treatment over here because of the lack of privacy."

Gascoigne's trip was funded by some of his celebrity friends, including former cricketer Ronnie Irani and broadcaster Chris Evans.

Match of the Day presenter Gary Lineker, who played alongside Gascoigne and Mabbutt at Tottenham, said on Twitter: "Gazza is struggling, Let's hope he can hang on in there. Others have generously offered help. #GetwellGazza"