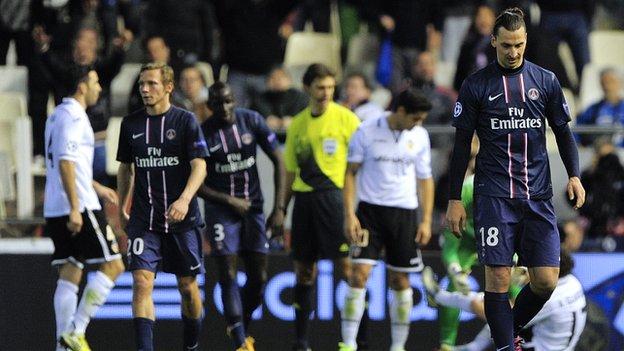 Adil Rami's stoppage-time goal gives Valencia hope going into the second leg of their Champions League tie against Paris St-Germain after the French side partly threw away their half-time lead.

PSG took charge as Ezequiel Lavezzi drilled in after 10 minutes and Javier Pastore tucked in Lucas Moura's cutback before the break for the visitors.

But with time running out, Rami headed in Tino Costa's free-kick for Valencia.

And Zlatan Ibrahimovic made it worse for PSG as he was sent off for a stamp.

The Swedish forward received his third red card in the Champions League - for three different clubs - after the referee decided he went over the ball in challenging Andres Guardado, although it appeared the contact was minimal.

It was an incredible finale to a game in which Carlo Ancelotti's PSG side looked comfortable for long periods.

In front of watching new signing David Beckham, the visitors had produced a commanding counter-attacking display, but the way they conceded so late in the game, with keeper Salvatore Sirigu failing to claim the ball as it found Rami at the back post, raised questions about their concentration.

There was a suspicion of offside too, but by that stage PSG should really have been out of sight, with Lavezzi guilty of missing two glorious second-half chances.

Now they will have to do without their talismanic striker Ibrahimovic for the second leg in Paris, although at times in this encounter he was merely a target as Lucas, Lavezzi and Pastore buzzed around him.

Lucas was courted by Manchester United last summer and on his Champions League debut, after signing in January, it was easy to see why.

The 20-year-old glided down the right on several occasions and before the visitors took the lead he cracked a shot against the post.

"He trained one week alone and tomorrow he starts with his team-mates. I don't think he will have a problem to play and he will help us to be better"

When it came, the opening goal was well-taken by Argentine Lavezzi as he played a neat one-two with fellow countryman Pastore before smashing the ball in. But questions will be asked of defender Ricardo Costa, who was rash in the challenge, and keeper Vicente Guaita, who failed to stop the fizzing shot close to his body.

The hosts recovered and enjoyed a decent spell of possession, but they failed to test Sirigu in the PSG goal with both Guardado and Ever Banega snatching at half-chances.

Ancelotti's side were happy to allow Valencia deep into the PSG half and then spring quick attacks, with young Italian midfielder Marco Verratti looking composed.

Following another Lavezzi shot, the French side took command with a second goal before half-time. Again Guaita was at fault, as Pastore hit Lucas's cutback between the keeper's legs.

Valencia boss Ernesto Valverde made two changes at the break as he aimed to give an added threat to his side. Sergio Canales joined Roberto Saldado in attack and fellow substitute Nelson Valdez forced Sirigu to tip over a looping header.

However, PSG weathered that spell and after the hour mark Lavezzi should really have put the tie beyond doubt with two glorious chances, but he spurned a close-range rebound and duffed a chip with only Guaita to beat.

Valdez skewed a great chance wide soon after as warning signs began to creep in for PSG and with Rami scoring, Ibrahimovic getting his marching orders and Lavezzi missing a brace of chances, a tie that looked over is now much more in the balance.

Paris St-Germain boss Carlo Ancelotti on Zlatan Ibrahimovic's red card: "It was a normal tackle and it was nothing special and I was surprised by the red card.

"We played really well, we have to be happy but at the end it was not good for us. Valencia is a good team, we have played the first half, but now we have to play second half and we have to pay attention."