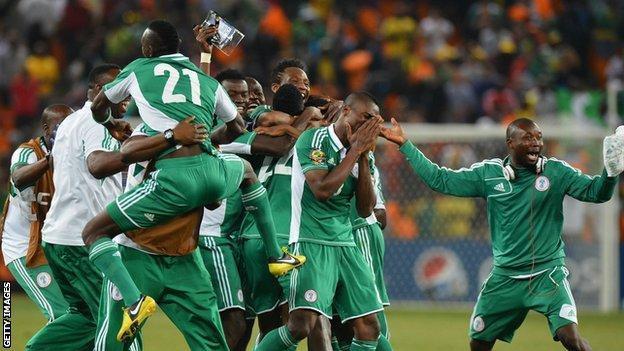 Nigeria coach Stephen Keshi hailed his players after they beat Burkina Faso 1-0 to win the Africa Cup of Nations for the first time since 1994.

Ex-Super Eagles captain Keshi becomes only the second man to lift the title as a player and coach after Egyptian Mahmoud El Gohary, and the first black coach to win the trophy since 1992.

"I am so proud of what my players did in this tournament," said Keshi.

"They played well and concentrated on the job. They have so much potential."

Keshi, who skippered Nigeria to the trophy 19 years ago, added: "When I came on board a year and a half ago my dream was to make Nigerians happy that they could have a very good team they could be proud of.

"We are not there yet but we are in the process and I am happy about that."

Winning this tournament is mainly for my nation

Sunday Mba scored the only goal in the 40th minute and Keshi joked that he could not describe what he was feeling in the last few minutes of the match.

Uppermost in Keshi's mind was the fact Burkina Faso equalised with the last kick of the game when the two sides drew 1-1 in their opening group game three weeks ago.

"You don't want to know what was going on in my head five minutes from the end," said the Nigeria coach, laughing loudly.

"So many things were going through my head but I was keeping the faith."

Keshi was under huge pressure to win the tournament, almost two decades after he captained the country to their last Nations Cup triumph.

The Nigerian media had been scathing of his decision to leave established players like Peter Odemwingie and Obafemi Martins out of the squad in favour of younger, inexperienced players like match-winner Mba who plays in the domestic league.

Nigeria's victory - their their title - means they will now face world and European champions Spain, Uruguay and Tahiti at the Confederations Cup in Brazil in June.

"It is an honour for us as Nigerians to represent Africa," said Keshi. "I haven't even thought about it yet but it gives us the chance to continue to improve."