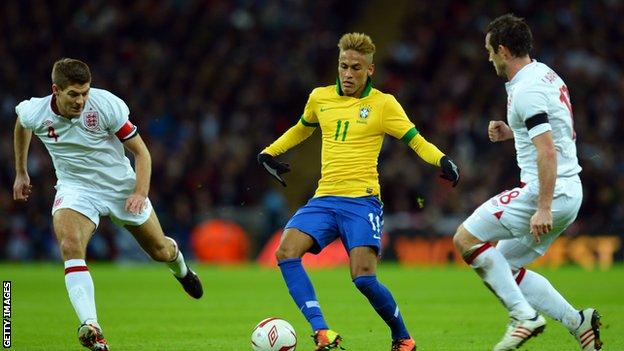 Europe's Champions League goes into the knockout stage in the very week that the Copa Libertadores, the South American equivalent, kicks off. Neymar features in neither.

The young Brazilian has yet to be tempted by a move across the Atlantic, and Santos, his club, failed to qualify for the Libertadores. So, for the next few months, he is left kicking his heels in the obsolete and irrelevant Sao Paulo State Championship. Might Neymar be harming his own development as a result of spending too long in his comfort zone?

It is a question that has to be asked in the light of last week's friendly against England. It is clear that in Neymar's short career the England game at Wembley forms part of a pattern.

Every time he comes up against opponents who are proficient at closing down his space he finds it hard to make an impact. It was the case in the 2011 Copa America, in both legs of the quarter and semi-finals of last year's Copa Libertadores, in the Olympic final against Mexico and in all the matches he has played for Brazil against top-level adversaries.

Part of this problem is technical. In domestic Brazilian football the defensive lines normally sit very deep - meaning there is plenty of space on the field for his type of player to pick up possession, decide what to do and gather speed as he seeks to go past his marker. When he steps up a level he is robbed of that time and everything has to be executed quicker.

But I am also tempted to believe that there is a psychological aspect to all this. An international audience might be excused some scepticism, but the talent is real. I well recall the first time I saw Neymar in the flesh - coming off the bench for Santos against Fluminense back in May 2009.

He only had eight minutes to show his stuff, but he came up with enough in that time to show that he was the real deal. From the hype that already surrounded him I had expected a dribbling specialist. But his first touch was a long-range pass that split the home defence and set up a goal.

His tight skills forced a red card for the Fluminense right-back and then his shot was pushed out by the keeper for centre forward Kleber Pereira to turn in the rebound.

A shaky 2-1 lead had turned into a 4-1 rout, and Neymar had shown he could pass, shoot and dribble - and all just a few months after his 17th birthday.

Soon afterwards Neymar went off to Nigeria to play in the Under-17 World Cup. With Liverpool's new signing Philippe Coutinho also in the team, it was the most-hyped Brazil side I can recall at that level. But they failed spectacularly.

Neymar had a poor tournament, unable to reproduce against adolescent opponents the form he was already showing in the Brazilian top flight.

I have the impression that ever since that competition, global football is something of a trauma in his young mind. For a player of his type, confidence is fundamental. But whenever I see Neymar one-on-one with a defender in top international games, I never believe he will win the duel and - for what it is worth - I have the impression he does not believe it either.

Meanwhile, in domestic football he is the undisputed king of the hill, accumulating goals and dribbling at pace worthy of comparison with a young George Best. But in the tough matches he does not seem to be making progress.

So why stay in Brazil? Why not match himself against tighter marking on a weekly basis?

True, there is no great financial incentive to move. He is already earning a fortune and there is also a personal issue - he has a son based in Santos.

There is, perhaps, one key professional justification for staying put, and it has to do with the words of Brazil coach Luiz Felipe Scolari after the loss to England. Scolari pointed out that the game came at a bad moment for those players who are based in Brazil, who, right at the start of the season, were not yet match fit.

In contrast, the England players and his own European-based contingent were in mid-season. But, added Scolari, the situation will be reversed when the sides meet again in Rio this June. Those based in Europe will have just finished a long campaign, while the domestic players will be in peak condition.

These same conditions will apply a year later when the World Cup kicks off. Perhaps the idea behind staying in Brazil is that it will give Neymar a physical advantage in 2014, which he can use to carry the host nation to World Cup glory - the perfect confidence boost before embarking on his European adventure.

Q. I'm following the Colombian national team's progress with great interest and am considering a bet on them to win the 2014 World Cup. They look well equipped as an attacking force with established players like Falcao, Martinez and Rodriguez, and exciting youngsters like Quintero and Muriel. My doubt is their defence. Do you think they'll be able to unearth enough defensive talent to mount a serious challenge in Brazil 2014? Steve Dodd

A. I think you have correctly identified their strengths and weaknesses. Colombia are playing some wonderful football, but their main centre-backs - Yepes, Mosquera, Perea - have all aged together. To compensate for their lack of pace they now have a tendency to drop deep and open up a hole between defence and midfield.

Time is tight to put this right. I'm not yet 100% convinced by Valdez, who played last Wednesday against Guatemala, but he is a younger option. And there is a youngster I'd love to see fast-tracked - John Stefan Medina of Atletico Nacional, a very promising defender.

Q. What are your views on striker Keirrison? I remember him being talked about after his move to Barcelona, but he appears to have just had a number of unsuccessful loan spells and is now back in Brazil on a long-term loan. Do you think he was just hyped too soon and what are the odds of him making a return back to Europe? Colin Brown

A. I've been wrong a hundred times, and will be wrong many times in the future, but I saw this one coming. Some disagreed with me then, but at the time I felt he was far too raw for a big European move. He was a front-to-goal, right-footed finisher and nothing else.

In addition to the disappointment of finding out that he was not as good as he had been allowed to believe, he has also had a bad recent run with injuries. If he can get fit then being back at Coritiba might be good for him - the return of Alex gives him a top-class supply line.