Manager Tommy Breslin is mindful that the Irish Premiership leaders play second-placed Crusaders in a north Belfast derby at Seaview on Saturday.

Despite squad rotation, Breslin hopes to keep the Cup tie alive ahead of the return leg at Solitude on February 18.

"We'll be sending out a team which is capable of getting a result," he said.

Cliftonville are 12 points clear at the top of the premiership, although Crusaders have a game in hand.

Breslin makes no apology for fielding a weakened team in Cork as the league clash at Seaview is his main priority. 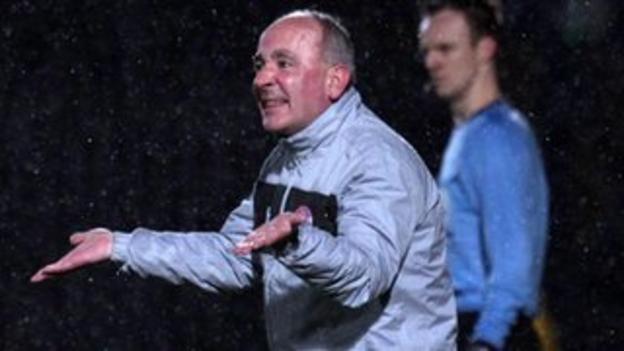 "With so many important games coming up domestically, it's important we get the balance right," he said.

"When we get to this time of year, you have to take stock of where your priorities lie and this game against Cork comes right in the middle of a busy run of league and cup matches for us.

"I'll be making full use of the squad for this first leg tie, and we'll still be using players with first-team experience.

"Had the fixture been at Solitude, maybe our line-up would have been different.

"But we'll be sending out a team which we believe is capable of keeping the tie alive and giving us a chance to make progress when Cork come up to Belfast next Monday."

Glentoran have Jay Magee back from suspension for their away tie against St Pat's Athletic.

Calum Birney may also feature after missing Saturday's 5-2 Irish Cup win over Bangor. However Richard Clarke is unlikely to travel to Dublin because of work commitments.

Oran Kearney says Coleraine will field their strongest possible line-up for their first leg tie away to Shamrock Rovers.

"We worked so hard last season to try and get into the Setanta Cup by finishing in the top six, that it would be remiss of us now to go and play the reserves in it," said the Coleraine manager.

"It is a competition we would love to do well in.

"We'll be going out very strong on Monday night to try and get something out of the tie to give us something to take home."

Portadown make the short journey to Drogheda United for their first leg tie.