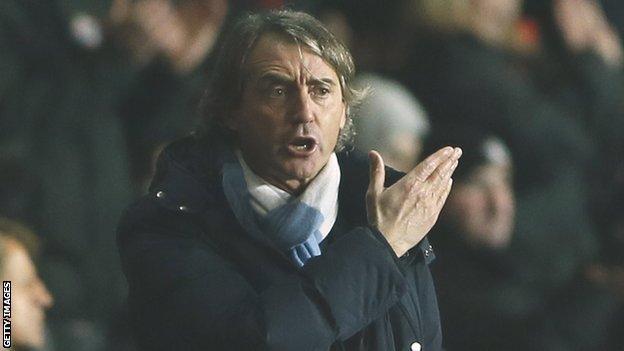 Manchester City manager Roberto Mancini says he will drop players who are not "ready to fight" for the team.

The Premier League champions have fallen 12 points behind Manchester United in the title race following Saturday's 3-1 defeat at Southampton.

"I only want players who are ready for the fight in the last 12 games," said Mancini, whose side host Leeds in the FA Cup fifth round on Sunday.

"I am very angry with a lot of my players, and very disappointed."

He also labelled the display as the worst his side have produced in three years.

With the Blues also eliminated from European competition, it has placed extra pressure on City in the FA Cup ahead of their clash with Leeds at the Etihad Stadium.

Mancini won the competition with City in 2011 and said he will make significant changes to his team this weekend.

"I will change players next week," the Italian told the Manchester Evening News. "[Against Southampton] We didn't fight for every ball.

"We can't always win by playing well - that is normal. Sometimes we play well and win, but you also need to be able to win because you fight for every ball, and fight against an opponent who also wants to win the game.

"Every team that plays against us treats it like a Champions League final, but we should know this, it is normal.

"We now have 12 games left, (we) need to do well in the Premier League, and we have the FA Cup - there are games left and we can do better.

"We need to finish the season the way we did last year."

City won their final six matches of last season as they overhauled Manchester United's eight-point gap to lift their first league title since 1968.

Striker Carlos Tevez is expected to return to City this week after a family problem, and skipper Vincent Kompany should also be available again, as will Matija Nastasic and Kolo Toure, who were not risked at Southampton after late returns from international duty.