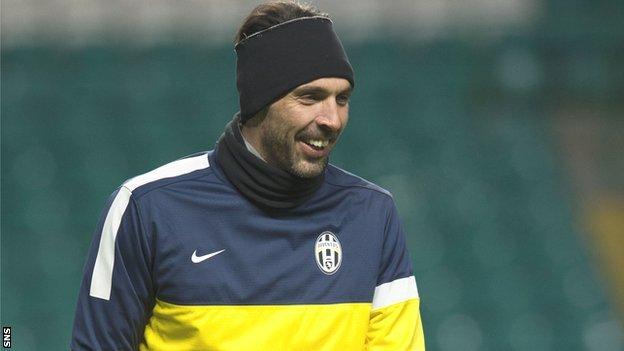 Juventus goalkeeper Gianluigi Buffon has played down the advantage Celtic fans might give their team when the Scots host the Italians on Tuesday.

Celtic and Juve meet in the first leg of their Champions League last-16 tie.

"I have played here two or three times with Parma and Juventus, although the last time, 10 years ago, I was on the bench," said the 35-year-old Italian.

"The atmosphere is very British in many ways but, as far as I can remember, no fan has ever scored a goal."

The fans at Celtic Park created a raucous backdrop when Neil Lennon's side beat Barcelona in the Champions League group stage.

And a sell-out 60,000 crowd should generate a terrific din for the visit of the Serie A leaders to Glasgow's east end.

We'll be stepping into a lion's den

"Certainly the crowd can help Celtic but only to a certain point," added Buffon.

"The opponents can't get carried away with this and must focus on their own game.

"The most hostile atmospheres I have ever played in, I would probably have to say is Turkey, at Fenerbahce and Galatasaray.

"Of course, here, at both Celtic and Rangers, they have stadiums that when full have an excellent atmosphere, we already know this and we respect this very much."

Buffon was in goal for Parma against Rangers in a Uefa Cup match at Ibrox in 1998, which ended in a 1-1 draw, and again in a Champions League qualifier the following year when Rangers won 2-0.

However, he was a substitute for Juventus in October 2001, when Celtic beat the Italians 4-3 at Parkhead in a dramatic Champions League qualifier.

Juventus manager Antonio Conte believes his team will have to be on their guard.

"If anyone has underestimated Celtic, it has certainly not been us. We have great respect for them," he said.

"We have followed Celtic very closely.

"They are a very good team. We will have to be very careful tonight."

Conte cited Celtic's defeat of Barcelona at Celtic Park and their narrow defeat by the Catalans in the Nou Camp as proof that Juventus would have to be on their toes for the first-leg tie.

And his comments mirror those of on-loan Juventus striker Nicolas Anelka.

The Frenchman, who joined the Italians from China's Shanghai Shenhua, insists Neil Lennon's side will be a dangerous proposition.

"What Celtic have going for them is no pressure," he said.

"It will be a tough game in Glasgow. It is one of the most famous and intense football cities in the world."

Conte's Juventus beat Fiorentina 2-0 at the weekend to open up a five-point lead in Serie A and arrive in Glasgow in confident mood.

Juventus sporting director Pavel Nedved believes the Italians will be stepping into "a lion's den".

"I'm fully aware of the atmosphere that awaits us in Glasgow because I've been there and experienced it first hand," said Nedved.

"We'll be stepping into a lion's den and I don't think the team will need firing up. We'll have to tough it out."

Juventus have been training at Rangers' Murray Park complex.