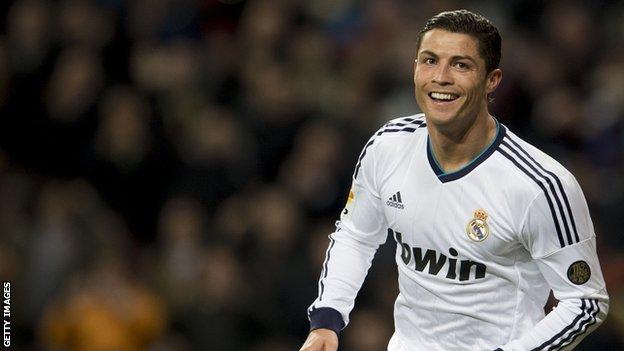 Ex-captain Neville played alongside the Portuguese forward from 2003 to 2009.

Before his old side's Champions League trip to Madrid, Neville said: "Ronaldo is a bully. He bullies the weakest defender. He does it all the time."

Wednesday's last-16 tie at the Bernabeu will be Ronaldo's first game against United since his £80m move in 2009.

Neville, who played 602 times for United, also praised his former team-mate for changing his view on how the game should be played.

The former England right-back added: "He changed my perception.

"We had a midfield four - Beckham, Keane, Scholes, Giggs - I played with Beckham for seven years. They never had the freedom to decide their position on the pitch.

"Suddenly I didn't have someone in front of me who would come back and double up on the [opposition's] left-winger.

"In those early years he used to go wandering off.

"He was told to play on the right by Sir Alex Ferguson and would end up on the left. That was unheard of.

"By the end of Ronaldo's Manchester United career I was willing him not to chase back so he was free.

"He just decided his own position, which was based upon where the space was and who was the weak link. He made me realise you didn't always need to be in your shape.

"We had a player who was beyond a level of talent I had ever seen. He would go and win us game after game. I suppose that is more important."

Ronaldo, 28, scored his 20th hat-trick since arriving in Spain during Real Madrid's 4-1 defeat of Seville on Saturday.

He has now scored 182 for the Spanish giants from only 179 games.

Neville is convinced Ronaldo is a better player than when he left Old Trafford.

"Now, he is a monster," he added. "I saw him on Saturday evening. He picks the ball up in an innocuous position, 30 yards out, does some type of shimmy I can't even describe let alone do, beats a man and whacks it in from 25 yards.

"You can't defend against that.

"Then he scores a counter-attack goal when he chases 80 yards forward, then he preys on the back of the centre-half and scores a hat-trick inside 30 minutes."

United manager Sir Alex Ferguson may ask Phil Jones to man-mark Ronaldo in the Champions League game, although Neville is not certain that will contain him.

"You literally need to have two men against him. Even then they might both get beaten," he told BBC Radio 5 live.