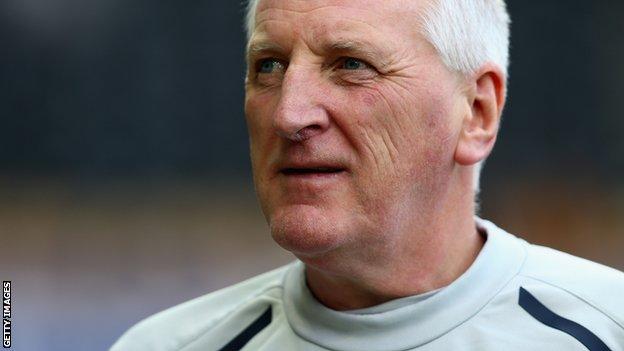 Ronnie Moore says that Tranmere Rovers are in danger of missing out on promotion after their recent form.

Despite being top of League One, Saturday's 2-1 defeat at Leyton Orient was Rovers' third league loss in four.

"If we're not careful we're going to let something slip that's something special," he told BBC Radio Merseyside.

He continued: "We said don't give away too many silly free-kicks - how many have we given away?

We're lucky that loads of teams are having the same panic as we are. We need to go back to doing the simple things

"How many balls have gone in our box? They're disappointed and have let everyone down, and I'm gutted for the people who have come here to witness.

"We are better than that, and we've got to make sure on Friday [against Shrewsbury] we prove it.

"We've got to show people why we have been top of the league for five months."

Moore's Rovers side only sit top of the league ahead of Doncaster Rovers on goal difference, with both Swindon and Bournemouth lying just a point behind the two.

Of the four teams, only the Cherries came away with a win at the weekend.

"We're having a wobble at the wrong time," Moore continued. "We're lucky that loads of teams are having the same panic as we are. We need to go back to doing the simple things."

And Moore says that the club need the football philosophy they adopted earlier in the season to get back to winning ways.

"For me, our strength has been the commitment, desire and the will to chase. I think some of them think they are better than they are," the 60-year-old added.