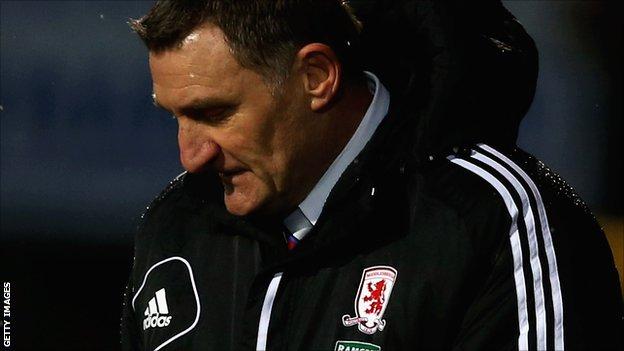 Middlesbrough manager Tony Mowbray has said he remains positive about the club's Championship promotion bid despite a run of five defeats.

The Teessiders were beaten 3-2 by Barnsley on Saturday to continue their miserable league run in 2013, but remain in the play-off places.

"Thankfully for us we're not in the bottom three, we're at the right end of the table," Mowbray told BBC Tees.

"That is a positive but we have to stick together and keep believing."

He added: "There's no shortcut, if I had a magic wand we would do something, we need the players selected to do their job and it will turn."

One bonus for Boro was a full 90 minutes for utility forward Mustapha Carayol on his sixth appearance of the season.

The 22-year-old returned to the bench in the 4-0 defeat by Ipswich but capped his first outing since September with a goal in Saturday's loss.

"He's had two run outs for the under-21s and he'd been training hard," Mowbray added.

"I didn't expect him to get the full game, but he got his goal and from his perspective it's great for him to be back.

"He does bring something different to our team."