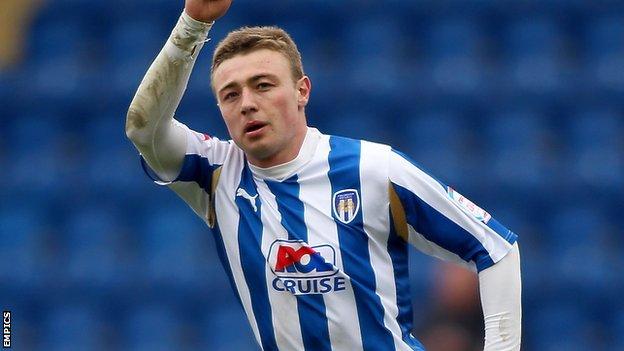 Colchester United striker Freddie Sears has said he is enjoying one of the best spells of his career since his debut with West Ham five years ago.

Sears, who has struggled to match his promise as a teenager, has scored four goals in his last five games.

"This is the first time in a long while I've really been enjoying it," the 23-year-old told BBC Essex.

Sears had a prolific record in the West Ham youth team and shot to prominence as an 18-year-old when scoring on his Hammers debut - a winner off the bench in a Premier League game against Blackburn.

But he failed to match the subsequent hype and, after a series of loan spells away from Upton Park, left the Hammers this summer with just two goals from 46 league appearances.

And his current record of seven goals for the U's this term is by far his best tally in one season.

The former England Under-21 international has now started in Colchester's last three games and featured in their last five.

"It's definitely the best run I've had. But it's the most consistent run I've had," he said after scoring the only goal in

"I've played the last few games and when you get the consistency, that's when you should be judged on your goalscoring.

"I had a long spell at West Ham where I was playing maybe one game every two months and to get judged on goalscoring then is very difficult.

"I'm happy at the minute, I'm enjoying my time here and I'm getting the benefits of playing regular football.

"I came into the game early and at the time it's unbelievable. But the seasons after you have to take a back step because it's about development and maybe you come on too soon."