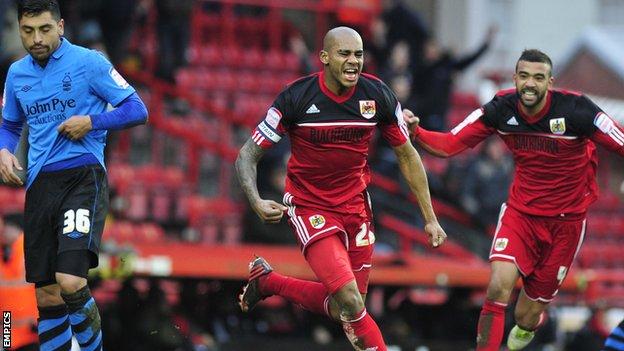 Marvin Elliott has said he was not concerned about starting for Bristol City just 24 hours after returning from international duty.

The midfielder, 28, helped Jamaica to a creditable 0-0 draw against Mexico in their World Cup qualifier on Wednesday.

Elliott was then thrown straight in to City's injury-hit team to face Nottingham Forest on Saturday, and scored in their 2-0 victory.

"It was an important game so I'm glad I did it," he told BBC Radio Bristol.

"It was a game I was really humbled to be involved in," he said of his second cap for his country.

"I enjoyed it but obviously it was a long flight there and back. I hadn't trained with the City boys all week and found out in the morning that I was playing.

"We were really happy with the performance and the goal was an added bonus. I'm feeling the effects now."

Head coach Sean O'Driscoll had called an early training session on Saturday to prepare his patched-up squad, which had been affected by injuries to Cole Skuse, Neil Kilkenny and Sam Baldock, among others.

O'Driscoll, who was appointed at Ashton Gate in January following the dismissal of Derek McInnes, said City's improved form was down to organisation within the ranks.

"I asked the players what they were doing well," said the 55-year-old. "They weren't disrespectful to Derek and thought he had some good ideas but thought they lacked some organisation.

"The players have bought into what we've tried to do. Hopefully they respect the fact that you've asked them and we're trying to do something about it.

"No one can moan about it because they're saying 'this is what we need'.

"That's why it's worked so quickly - they've identified the problem and we've worked together to solve it."