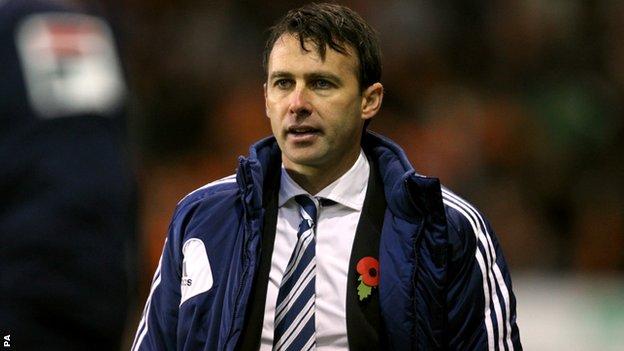 Bolton boss Dougie Freedman says he is prepared to make "brave" decisions after his two substitutes scored in a 2-1 win over Burnley.

But replacements Craig Davies and David Ngog scored both of Bolton's goals.

"In this game you've got to make brave decisions. Sometimes it goes against you, but I'll never shy away from that," he told BBC Radio Manchester.

"I know the fans want their favourite player, but I'd studied Burnley and I knew their tempo decreases as the game goes on and felt we had to change in the last half an hour.

"I had to take him [De Ridder] off, he's not played any football. I wanted to keep him on the pitch but I have medical staff telling me if I don't take him off you're going to get a hamstring [problem]."

Bolton's win is their first at the Reebok Stadium in 2013, and has dragged them three points away from the drop zone.

And Freedman feels the team can build on Saturday's win to move further away from a relegation scrap.

"The result may lift some of the psychology at home," the 38-year-old said.

"So we need to build on our success, but we've got to make sure we perform the way we have been."