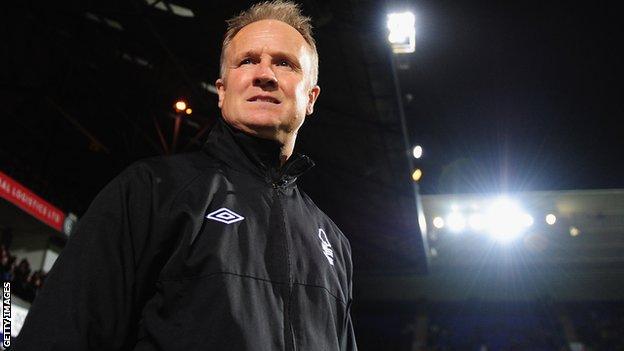 Former Nottingham Forest boss Sean O'Driscoll is not surprised by events at the club since the Al-Hasawi family's summer takeover.

The now Bristol City manager was sacked by Forest on Boxing Day.

"I'm no idiot," O'Driscoll told BBC Radio Nottingham. "You go into a club as big as Forest with foreign owners with your eyes wide-open.

"Look at QPR - they went through four managers before they realised you can't run a football club like that."

The Al-Hasawi family have been at the City Ground since July and last week made their third permanent managerial appointment since taking over at the club in Billy Davies, following in the footsteps of O'Driscoll, who arrived following Steve Cotterill's departure, and Alex McLeish.

The owners didn't interfere but I'm not the manager anymore, Alex McLeish isn't either. Maybe that was our problem

"I knew the sort of thing that happened at QPR could happen to Forest. It's a shame because it's a fantastic club with fantastic supporters and a really talented group of players," he added.

O'Driscoll believes expectations at the club were unrealistic given the 12 summer signings and the team's struggles last season.

"We were one point off the play-offs," he argued. "What did they want, 10 points clear at the top?

"You can't totally change a team that just avoided relegation one year and then expect that. It's not going to happen in the Championship."

The former Doncaster and Crawley boss, who only took took over in July, did however insist that the board had never interfered with his management of the club.

"The owners didn't interfere but I'm not the manager anymore and Alex McLeish isn't either. Maybe that was our problem.

"Everyone knows Billy Davies is his own man and I'm thinking, is it a problem that'll go away? I'm not so sure," he concluded.