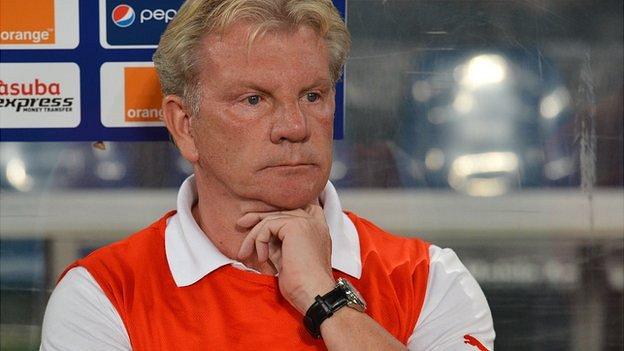 Burkina Faso coach Paul Put paid tribute to his side's spirit after they were beaten 1-0 by Nigeria in Sunday's Africa Cup of Nations final.

Sunday Mba's goal was enough to end the Burkinabe's dream of lifting the trophy in their maiden final appearance.

With the Stallions having never previously won a Nations Cup match on foreign soil, Put was full of praise for his team's efforts in South Africa.

"I saw a team that was fighting until the last minute," he said.

"Maybe we showed Nigeria too much respect in the first 45 minutes. In the second half we tried to do everything possible, we were a little bit unlucky but also we have to be honest.

"You have to be great when you lose and you have to be small when you win. So, my congratulations to Nigeria and also to my players - I am very proud of what they did in this tournament."

Few people had expected the Burkinabe to progress from a tough group, which pitted them against Ethiopia, Nigeria and 2012 champions Zambia.

But their determination, ability and resilience took them to the final, overcoming red cards and some controversial refereeing decisions as well as the loss of top striker Alain Traore to injury along the way.

Put added: "What we have seen is a team playing with a lot of spirit, a lot of mentality. Also I don't think we received a lot of luck so we did it really through our own quality.

"We have to be very proud of the players because we have now played in a final. We lost the final but I think we deserved to be there more than any other team.

"It's possible we were a little bit tired, because we played extra-time in our matches and also only had 10 men against 11 sometimes. But I don't want to make excuses.

"There is always a winner and a loser and you have to accept that. It's hard but it's life."

Looking ahead, Put is under no illusions that there is still much work to do - starting with a 2014 World Cup qualifier at home to Niger in March.

The Stallions currently prop up Group E, lying bottom with no points behind Niger and Gabon - who both have three points - while Congo top the table with maximum points from their opening two games.

The Burkinabe had drawn 0-0 at home to Congo in their opening qualifier, only for Fifa to award the points to the Congolese after ruling that the Stallions had fielded an ineligible player.

Put's side travel to Niger in June before taking on Congo and Gabon later in the year, and they would seem to win every game to have a chance of making it to Brazil.

"We have a good group of players but we have to be realistic, there is still a long way to go because the most difficult thing is to maintain your success," added the 56-year-old Belgian.

"In football, you lose today and tomorrow you have to get up for the next game. If we cannot prepare properly for the Niger game I will be very disappointed."