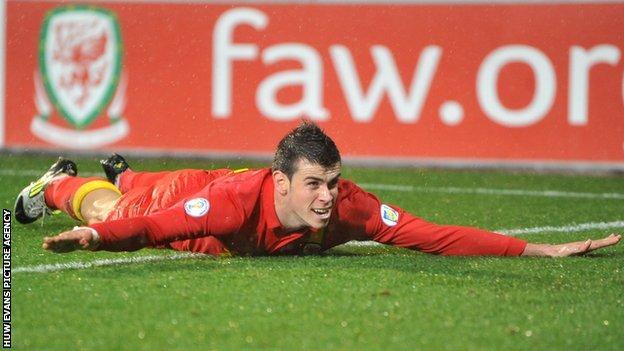 Bale's recent form for Tottenham and Wales has seen him bracketed among the world's best players and linked with a move to Real Madrid and Barcelona.

But former Wales striker Rush, who struggled after moving from Liverpool to Juventus in 1987, warned: "It's got to be something he's happy with.

"You will learn when you go abroad, but would he be happy?"

Rush added his admiration to a plethora of plaudits after Bale followed up a goal for Wales on Wednesday with two for Tottenham Hotspur on Saturday.

That took Bale's goals tally to 19 for the season, and intensified the speculation over his club future.

Spurs manager Andre Villas-Boas has said losing the 23-year-old winger would be "a disaster", comparing it with Barcelona letting go of Lionel Messi or Real Madrid selling Cristiano Ronaldo.

Rush was one of Europe's most prolific strikers when he ended a hugely successful spell at Liverpool - during which he won the European Cup, four Division One titles, four League Cups and the FA Cup - to join Juventus.

He struggled to replicate his trademark scoring prowess in Italy, although he maintains his 14-goal return contradicts the general perception that his time in Serie A was a failure.

But the striker admits he found difficulty in adapting to life in Italy, particularly in trying to learn Italian and integrating with his Juventus team-mates.

"It was a big culture shock," said Rush, who returned to Liverpool after a year in Turin.

"It's a bit easier in today's world than it was 20-odd years ago. But it's got to be something Gareth's happy with.

"If you're not happy you won't produce your best football. He's happy what he's doing [at Spurs] and that's what it's all about."

A top-four finish to guarantee a Champions League spot for next season is considered as vital if Spurs hope to keep their prized asset.

But former Wales striker John Hartson, currently part of the national side's coaching team under Chris Coleman, believes that may not be enough to persuade Bale to resist the advances of one of Europe's biggest clubs.

"Offers will come in, irrespective of whether Spurs are in the Champions League - I don't think that makes a massive difference," he said.

"If Gareth wants to move, he'll decide to move with his advisers.

"Spurs will be tested in the summer in regards to what they can offer him and what bids come in for him.

"I was a player that moved around a lot but Gareth may well have found his home at Spurs, he might be quite happy to stay there.

"But if Gareth has any ambitions of winning titles, he gives himself a better chance by going to Barcelona, Manchester United or Real Madrid.

"Spurs are nowhere near winning the league or the Champions League.

"If he wants to be considered as one the best players we've ever seen, he needs to play at the very highest level, and that is in Spain to be challenging for the Champions League.

"I'm sure that's something Gareth will be thinking about."