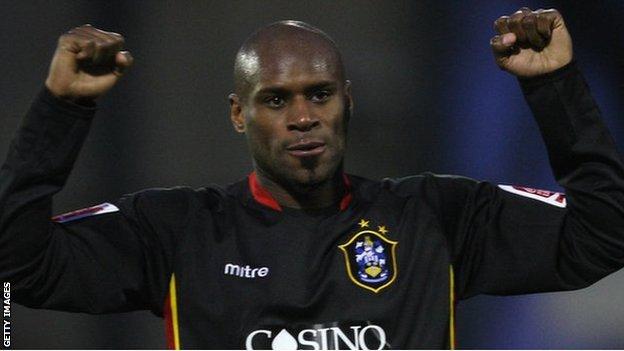 Frank Sinclair has stepped into management for the first time by taking over at Colwyn Bay.

Former Chelsea defender Sinclair, 41, joined the club a year ago as a player and agreed to take charge following the resignation of Lee Williams on Friday.

Williams had lost all four games in charge since succeeding Jon Newby.

Sinclair inherits a team with just two wins in their last 14 games, who are languishing in the Blue Square Bet North relegation zone.

The Seagulls are currently seven points adrift of safety, but have three games in hand over the team directly above them, Histon.

Sinclair, who spent two seasons at Wrexham from 2009 to 2011, will face Bradford PA in his first game in charge on Saturday.

"I'm chuffed the board have backed me," he told BBC Wales Sport. "I've really enjoyed my time here - I've been respected by the players, the staff and everyone involved with the club.

"Now I've been given the task of keeping the club in the Conference North."

Sinclair said Colwyn Bay was the perfect place to begin his managerial career.

"You can't play forever and you think about your next step in football," said Sinclair, who played for Jamaica at the 1998 World Cup.

"I've always wanted to stay in football and the opportunity I've been given here now is an unbelievable one. It's a very good level for me to manage at as my first job.

"I've been lucky enough to have played under some great managers at the likes of Chelsea, Leicester, Burnley and even at Wrexham when I worked with Dean Saunders.

"I've been given great advice on how to go about being a manager and I'll be picking the brains of managers around the country that I know."