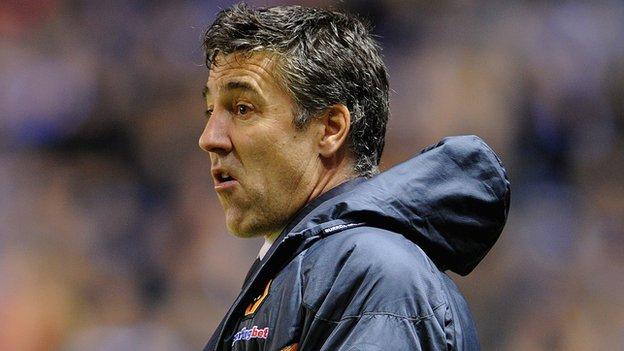 Wolves manager Dean Saunders has confirmed that he plans to enter the emergency loan market in an attempt to plug his side's leaking defence.

The struggling Championship side are reported to be in talks with Reading's Latvian defender Kaspars Gorkss.

"This team has been conceding too many goals for three years. I have to change it as quickly as I can."

And having failed to make a signing in the January window, missing out with a bid for Birmingham City centre-half Curtis Davies, Saunders still sees a new defender as his main priority.

"I recognised what the problem was," added the Wolves boss. "I've been trying for three weeks and I've got to get some players in that we can afford."

After leaking just one goal in his first two games in charge, Wolves have now shipped two in each of their last three matches to leave Saunders still looking for his first win in charge ahead of this Saturday's trip to one of his old clubs, Derby County.

But for Danny Batth's late equaliser to rescue a point in Saturday's 2-2 home draw with Leeds United, Wolves would actually already be in the Championship bottom three.

And, although Saunders is insistent that Wolves were hard done by with the award of a late penalty to Leeds at the weekend, he is adamant that they have to improve their defending all over the park if they are to avoid a second successive relegation.

A lot of these games in the Championship are scraps. And if you can't deal with it you're not going to get very far in this league

"For me to do the job properly we can't keep conceding goals from simple football," he added.

"All the teams I've had in the past have had a defence that keeps clean sheets, that can defend goal-kicks, defend long throws and defend free-kicks. It's the easiest type of football to defend against and we've struggled.

"We did enough to win the game, but history tells you that we can't keep the ball out of our net and I've got to do something about it.

"A lot of these games in the Championship are scraps.

"Leeds play for goal-kicks and free-kicks. They pick out the smallest defender and put the ball in behind you. And if you can't deal with it you're not going to get very far in this league."