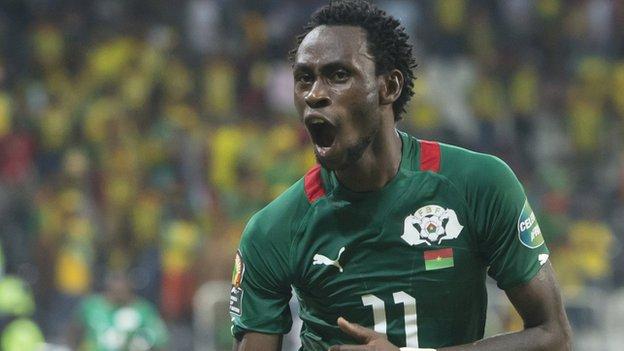 Five players from Nigeria's victorious side have been included in the 2013 Africa Cup of Nations All Stars team, while Burkina Faso's Jonathan Pitroipa was named the tournament's best player.

Chosen by the Confederation of African Football (Caf), the award will be some consolation for Pitroipa after his side lost Sunday's final to the Nigerians.

Sent off in the semis, he played in the final after Caf rescinded his ban.

The incident proved to be one of the competition's biggest talking points, after Pitroipa picked up a second yellow card for simulation late in the semi-final victory over Ghana.

Thankfully for Pitroipa, referee Slim Jdidi admitted he had made a mistake in his match report, so allowing Caf to overturn the ban and allow him to take to the field in Johannesburg on Sunday.

Pitroipa's compatriot Bakary Kone also made the team but the bulk of the players came from the Super Eagles, who lifted the trophy for the first time since 1994 - and for the third time overall - after their narrow 1-0 win.

Vincent Enyeama, who pulled off a brilliant and important save in the final to deny Wilfried Sanou with the score at 1-0, was named as the team's goalkeeper.

The Israel-based goalkeeper was joined by several compatriots in the side: defender Efe Ambrose, midfielders John Obi Mikel and Victor Moses as well as striker Emmanuel Emenike.

Chelsea winger Moses, who was superb in the final, also picked up the fair play award and Emenike, who missed the final through injury, won the golden boot as the tournament's top scorer.

"Winning my first African Nations Cup - and ending as the joint top scorer, I am so, so happy," Emenike told BBC Sport.

"This tournament has been very great, starting from the first game when I scored against Burkina Faso, because I hadn't been doing great for the national team before that."

One player was picked from each of the losing semi-finalists Mali and Ghana, as well as quarter-finalists Cape Verde and Ivory Coast.

There was no place for Ghana's Mubarak Wakaso, who found the back of the net four times to finish as the joint top scorer alongside Emenike.

Africa Cup of Nations All Stars: