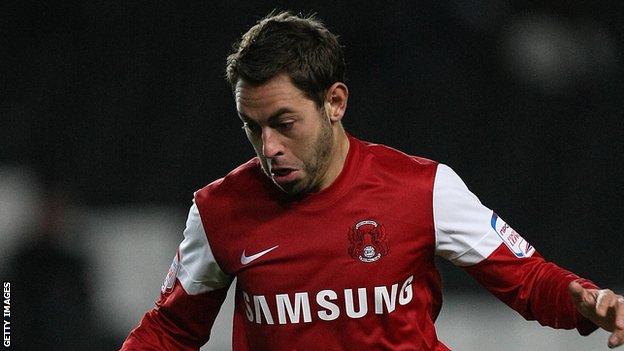 Leyton Orient winger Lee Cook says the pressure will be on Southend United in the second leg of the Johnstone's Paint Trophy southern area final.

The O's head to Roots Hall on Wednesday trailing 1-0 on aggregate.

He told BBC London 94.9: "It's all pressure on them and we are going to go there and play our game.

"Now they've got a lead to hang onto, will they drop deep? Will they hang on to the 1-0? Or will they play their normal game?"

The 30-year-old added: "Our away from has been great and we are fully confident we can do it.

We are creating opportunities every week. When we play at their place, the chances will be created

"I imagine it is going to be packed there and let's see if they feel the pressure."

Despite losing the first leg at Brisbane Road, Cook is confident Orient can overturn a one-goal deficit in the second leg.

"I can't remember Jonesy [O's keeper Jamie Jones] having too many saves to make," Cook continued.

"David Mooney could have had three on another night. For a striker in form, he's getting in those positions.

"When we play at their place, the chances will be created for him.

"We are creating opportunities every week. The chances will be there.

"We had a meeting and [assistant manager] Kevin Nugent said we are 100 percent confident we are going to Wembley.

"They are trying to bed that into us."

Former QPR wide man Cook, who joined Orient on a short-term deal in August and recently signed a deal until the end of the season, has enjoyed playing in the competition.

"This is the first year I have played in this tournament and it is a great opportunity to play at Wembley," he said.

"It's weird because when you're in the Championship you don't have this competition so the only opportunity you get [to go to Wembley] is the play-offs.

"If you're a top League One side, you should really get to the southern final.

"When we went 1-0 down, I could see Wembley getting further away.

"For League One and League Two players it is a great little tournament."

Meanwhile Cook says the Southend players could come to rue their overconfidence at the end of the first leg at Brisbane Road two weeks ago.

"I kept a close eye on their players after the game and I could see it in them," Cook said.

"They thought they were there [at Wembley].

"If it was us and we had won 1-0 we wouldn't have reacted like that as there's another 90 minutes left.

"That could work to our advantage."