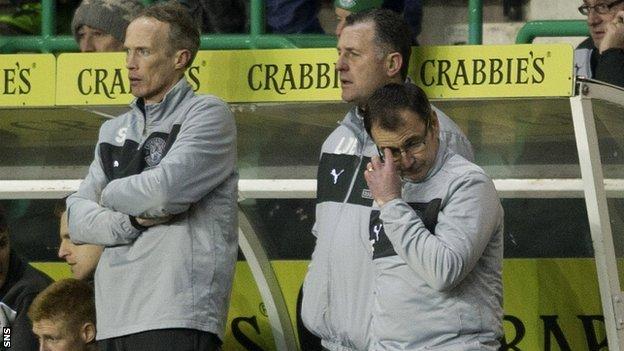 Hibernian manager Pat Fenlon lamented a "shocking" performance from his side in the 3-1 defeat by St Johnstone.

"We got bullied and bossed and never got going," Fenlon told BBC Scotland.

"It's embarrassing. I don't think we worked hard enough. St Johnstone played well but they worked really hard. We just went through the motions."

And he added: "We never worked hard enough and that's the most disappointing thing.

"We haven't had that for most of the season but over the last few weeks we haven't shown the desire to win football matches.

But Fenlon added: "That doesn't mean anything and I think that's what people need to get out their heads.

"You don't mind getting beaten and there's a way to lose and we didn't show any real fight and desire to get something out of the game."