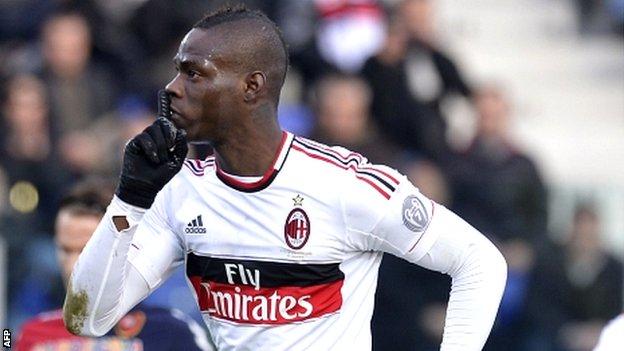 Inter Milan have been fined 15,000 euros (£12,900) after racist chants from their fans about AC Milan's Mario Balotelli at a match against Chievo.

Juventus were also fined 15,000 euros after their fans were heard singing territorial songs about rivals Napoli.

And Napoli were the third team to be fined that amount after away fans were adjudged to have shone a laser pen at referee Daniele Orsato at Lazio.

Inter president Massimo Moratti was quick to condemn the behaviour of his team's supporters and hoped there would be no repeat when the Milan teams meet at the San Siro on 24 February.

"I was told about it because I couldn't make out clearly what they were saying. I'm very sorry about that," Moratti said.

"I'm very sorry and I really hope it doesn't happen during the derby."