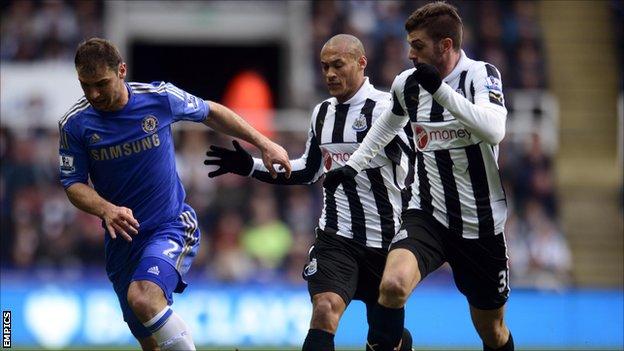 United signed six players during January - arrivals who have coincided with a run of two wins in three games.

"They've only played two or three games but it's like they've been here for a year," Santon told BBC Newcastle.

"We've grown in confidence, we understand each other, we're a really strong team and we are competitive."

Santon added: "The atmosphere among the players is really nice."

Meanwhile, the Magpies lost 2-1 at Tottenham Hotspur on Saturday, on what proved to be a bittersweet afternoon for Gouffran.

Gouffran, who joined the club from Bordeaux, struck his first goal of the season to pull Newcastle level before Gareth Bale struck his second of the game to see off Pardew's side.

"I was happy for him, he's only just come to Newcastle and he worked hard," Santon continued.

"I was sad in the second half because he got injured. I hope he's OK for the next game because he's really important for us."