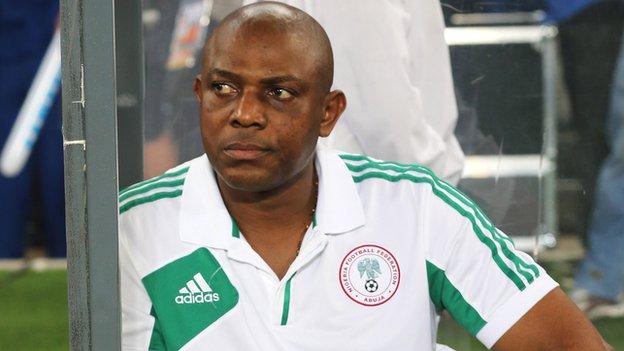 Coach Stephen Keshi has decided against resigning his post just hours after leading Nigeria to their first Africa Cup of Nations crown since 1994.

Reports emerged that Keshi had offered to quit after Sunday night's defeat of Burkina Faso, following disputes with the Nigeria Football Federation (NFF).

"I am pleased to say that I have reconsidered my position and have decided to continue with my job," Keshi said in a statement.

Keshi took charge of Nigeria in 2011.

On Tuesday, the former Nigeria captain is set to return to rapturous acclaim in the capital Abuja as the squad returns home from South Africa.

The 51-year-old, who became only the second man to win the Nations Cup as both a coach and a player on Sunday, paid tribute to Nigeria's Sports Minister Bolaji Abdullahi for helping to resolve his rift with the NFF.

On Monday, Keshi told a South African radio station that he had informed NFF officials that he no longer wanted to continue working with them - although he never submitted a formal letter of resignation.

Keshi cited frustration as well as a lack of support and respect on the part of the NFF for his reasons.

But after an emergency meeting with Abdullahi in the early hours of Tuesday in Johannesburg, Keshi rescinded his decision to quit.

"While I have had cause to express my displeasure over some issues that happened in the course of our (Nations Cup) participation, especially concerning my relationship with the NFF, I have since had opportunity to discuss the various issues with all concerned," his statement said.

"I want to thank the Honourable Minister of Sports, Bolaji Abdullahi, for his swift and kind intervention."

In an interview with BBC Sport, the Nigeria coach explained how he had been upset by hearing constant rumours during the group stage of the competition that he was set to be replaced.

"A coach's job is to be hired and then fired, so that doesn't really matter," Keshi told the BBC.

"The only thing that annoyed me was that there was no respect in all this activity - because even if you are looking for a coach, you still have to let me know that this is what you are going to do."

"I am not really angry but they need to show me a little bit of respect. Because I am a black person and also a Nigerian, they think they are doing me a favour by allowing me to coach the Super Eagles.

"They are not doing me a favour because I am working day and night (to succeed) and we thank God that we have the cup and that Nigerians are happy."

NFF spokesman Ademola Olajire reacted to Keshi's claims by denying that they were true.

"Rumours were flying around during the group games but no one can prove these things. The NFF continues to support and back the coach amidst all this media speculation," he told BBC Sport.

Keshi's Nigeria host Kenya in a World Cup qualifier next month - before travelling to both Nairobi and Namibia for further ties in June.

It is unclear whether the team leading Group F of the African standings will reschedule the Namibia tie, which is set to be played three days before the Super Eagles start their Confederations Cup campaign.

The African champions face Tahiti in the Brazilian city Belo Horizonte on 17 June, before meeting Uruguay and Spain in Group B of the global competition.