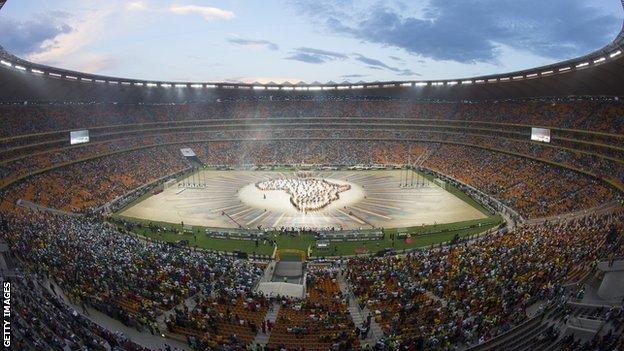 Whether it was being swarmed by jubilant Nigerian fans after their third continental triumph, consoling the proud Burkinabe after their historic run to the final, or just seeing local South Africans come out for one last football party, it was a joy to witness what following this sport can bring.

But how good was this Africa Cup of Nations?

Football-wise, few neutrals can argue that Nigeria didn't deserve to win the trophy.

Despite being nervy in the group stage, and coming within 10 minutes of elimination in their final match against Ethiopia, the Super Eagles flew through the knock-out stages with superb wins against Ivory Coast and Mali.

The final was more cagey, but won with a tremendous goal from Sunday Mba, one of the six local league players picked by charismatic coach Stephen Keshi.

Iffy Onuora, the former Ethiopia national manager, born in Scotland to Nigerian parents, says it was a fitting victory.

"Nigerian football's back story in recent years has been one of upheaval, and all the pre-tournament attention was on Ivory Coast, Ghana and the hosts, but Stephen Keshi's team flew under the radar," he told BBC Sport.

"Keshi's gamble of leaving out several established stars paid off, and the squad looked unified. Chelsea's Victor Moses came of age in this tournament."

There were disappointments: Ivory Coast yet again failing to live up to their favourites tag, the triple whammy of Morocco, Algeria and Tunisia failing to make the knock-outs and Zambia's weak title defence.

But these were more than made up for by the elements of surprise.

Ethiopia, described by BBC Sports Correspondent Alex Capstick as having the best fans in any Nations Cup he had witnessed, gave hope for East African football with some gutsy displays.

Cape Verde, on the big international stage for the first time, were inventive and skilful, and almost forced Ghana into extra-time in their quarter-final.

"Seeing coach Lucio Antunes racing around the stadium with his national flag after the win over Angola and then the team mobbing him during the post-match press conference was a personal highlight," says the BBC's Nick Cavell.

"He didn't let go of the flag until after he left the stadium."

Now that a West African nation has claimed the trophy for the first time in ages, North Africa will be desperate to take it back on home soil

Then there was Burkina Faso, whose strength and determination not to be fazed by poor refereeing in their semi-final, won the admiration of football fans the world over.

As for the hosts, it was par for the course. The majority of home fans did not think they would make the semi-finals, and they were right.

Gordon Igesund brought solidity to a previously shaky side and if luck had gone their way, they might have edged Mali to make the final four.

But Bafana fans will also have to admit they were saved on more than one occasion by goalkeeper Itumeleng Khune in the thrilling 2-2 draw with Morocco that saw them edge through the group stage.

The glory days of Lucas Radebe and Phil Masinga winning on home soil in 1996 seem a long, long time ago.

The Confederation of African Football (Caf) will say these finals were the best attended ever, with nearly 800,000 tickets either sold or distributed.

But crowds were clearly sparse, especially in Port Elizabeth and Rustenburg, and the tournament marketing left a lot to be desired.

"The buzz around the tournament felt very different to a year ago when I was in the city of Libreville in Gabon," says the BBC's John Bennett, who also covered the 2012 tournament.

"That was a much smaller place and they weren't used to hosting such big events so the excitement levels were huge."

The organisers will say they had only 16 months to prepare, after Libya, the initial hosts, withdrew due to civil unrest.

Ticket prices were kept as low as £4 (US$6.25) for group games and the inclement weather at some venues did not help matters either - people were not buying tickets on the day of the game.

No event is perfect, and Caf and local organising committee were at pains to stress that negative publicity surrounding the poor state of the Nelspruit pitch, for example, should not cloud what they say was a successful event.

Morocco, who host the next finals in 2015, have earmarked six venues each with a capacity of over 45,000 and would hope for a significant number of supporters to come over from Europe.

Onuora is looking forward to seeing the rivalry between North African and West African nations continue.

"There is intense competition between the two, and now that a West African nation has claimed the trophy for the first time in ages, the North Africans will be desperate to take it back on home soil," he says.

"Facilities-wise, it should be just as good as South Arica but I hope the pitches are in better condition, as the players and fans deserve better."

The biggest hurdle for the Nations Cup, and for domestic football in Africa, is the prevalence of European football on television screens, especially the Premier League. It is everywhere. And fans prefer it.

In a Johannesburg bar one evening, punters had the choice of watching the Ivory Coast-Nigeria quarter-final in one half of the establishment, or Manchester City versus Liverpool in the other.

It was sobering to see the reality, but if the continent's new generation of footballers wants to join the likes of Yaya Toure as an A-lister, then performing well in a Nations Cup should be at the top of their priorities.