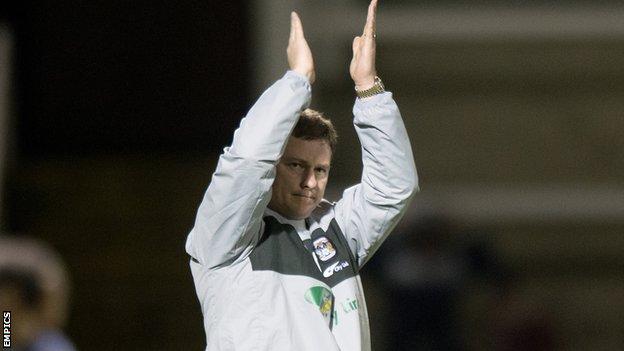 "Once we had done everything we could and it was obvious that he was still interested in talking to Huddersfield, we had no choice other than to let him do so," read a Coventry statement.

Coventry added that "more than one club" had shown interest in Robins.

On Tuesday Huddersfield said they would immediately begin talks with Robins.

Coventry had rejected an initial approach from Huddersfield and chief executive Tim Fisher said he still held out hope that Robins would remain with the club.

"We are just hoping that when he weighs up his options and opportunities, he will see the great progress to date and the support he has from fans and management alike, coupled with the potential in Coventry, and decide to stay," added Fisher.

Speculation about Robins's future at the Ricoh Arena has increased since the Terriers first asked for permission to speak to the 43-year-old Mancunian.

Town have been managerless since

The former Rotherham United and Barnsley boss only when the Sky Blues were in the League One relegation zone.

But he has since helped to turn Coventry into play-off contenders, lifting them to eighth in the table and leading his side to the northern final of the Johnstone's Paint Trophy.

They stand only four points off the play-offs, and could swap places at the end of the season with Huddersfield, who are 18th in the Championship - three points off the danger zone.

But Coventry's off-field financial problems have not yet been finally resolved - and Robins has now been linked with three different clubs in the past few weeks.

Doncaster Rovers, who have since appointed Brian Flynn, and Blackpool were also reported to have shown interest in the 43-year-old.

And it looks increasingly likely that the Sky Blues may have to start searching for another manager, who would be their 12th just over 11 years.

Robins is reported to have a release clause in his contract allowing him to leave if any interested club are prepared to pay an unspecified compensation fee.

And first-team coach Steve Taylor and fitness coach Darren Robinson would also be expected to follow him to the John Smith's Stadium.