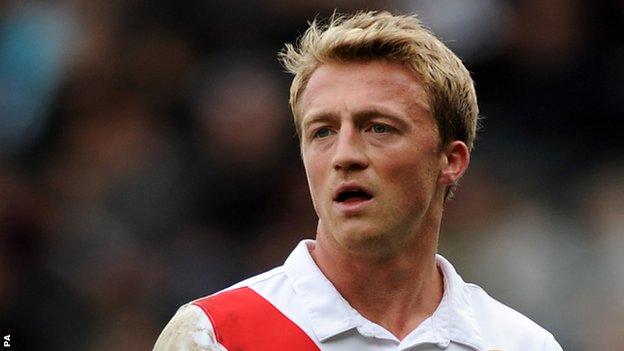 Lee Barnard says the early stages of his Oldham career have been akin to a "rollercoaster" ride.

The 28-year-old forward joined the Latics on loan from Southampton on deadline day, only four days before manager Paul Dickov stepped down.

"It's been a bit of a rollercoaster," he told BBC Radio Manchester. "I came in and got to know the boys and gaffer.

As a footballer, life goes on, and you just need to keep training hard and not worry about everything that's going on off the pitch

"Unfortunately we had a bad result and it's a shame Paul stepped down. I was looking forward to working with him."

Barnard, who has two goals in his first two games for Oldham, continued: "As a footballer life goes on, and you just need to keep training hard and not worry about everything that's going on off the pitch."

Philliskirk has stated that he is focused upon his role with the youth, but Barnard believes that the 47-year-old would be able to make the step-up to a permanent position with the senior team.

"There's been a few rumours that everyone knows of but all we can do is keep doing what we are doing," he added.

"Tony's come in and set us up well. I've only worked with him for a few days and I've been very impressed.

"He's got enough to step-up to first team football - if he takes it I'm sure he will do very well."