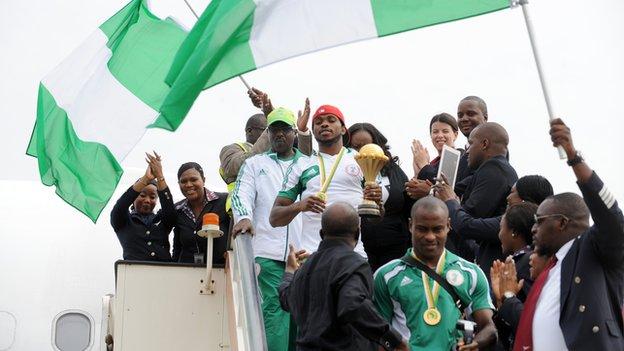 Thousands were at Abuja's airport to greet the team, who beat Burkina Faso 1-0 in Sunday's final in Johannesburg.

There was a thunderous roar when the squad emerged from the airport terminal to enter their bus, said the BBC's Chris Ewokor in the Nigerian capital.

Despite the fact that no public holiday had been declared, crowds turned out in huge numbers to line the streets as the team travelled from the airport to Abuja's city centre.

"The mood is electric. Many people are wearing the national colours of green and white, while some are wearing hats sporting pictures of the Super Eagles," our reporter said.

After plenty of expectation ahead of previous Nations Cup tournaments, Nigeria's triumph was unexpected by most fans - an emotion which made the success all the more enjoyable.

"I am very excited," said Godwin Orinyo, who had travelled to the airport to greet the team.

"The final was so sweet and I was so happy afterwards that I couldn't sleep. My mum almost collapsed she was so happy. Today is too sweet - I am overjoyed."

Super Eagles captain Joseph Yobo led the squad off the plane after it touched down on Nigerian soil with the trophy on board.

Many eyes were also on coach Stephen Keshi, who initially quit after the triumph in protest at his working relationship with officials from the Nigeria Football Federation.

After Sports Minister Bolaji Abdullahi intervened to help resolve the row following talks that lasted into early Tuesday morning in South Africa, the NFF released a statement from Keshi in which the coach had 'reconsidered his position'.

Should the former Nigeria captain, who also won the trophy as a player in 1994, continue in his post, he will try to lead the Super Eagles to the 2014 World Cup as well as to Confederations Cup glory in Brazil in June.