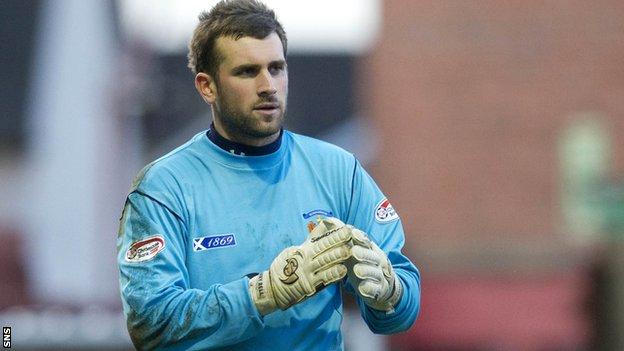 Kilmarnock goalkeeper Cammy Bell says he has yet to come to a decision on whether his future lies at Rugby Park or elsewhere.

Rangers are one of the clubs to have been linked with signing the 26-year-old in a pre-contract agreement.

"There has been discussions but I haven't signed anything with anyone yet," said Bell.

"I feel it's only right that as a player I look at all avenues but nothing has been agreed yet."

I feel it's only right that as a player I look at all avenues but nothing has been agreed yet.

With Rangers' current transfer embargo, Bell would not be able to join up with Ally McCoist's side any earlier than 1 September.

But Bell admits he may remains in the Scottish Premier League with Killie.

"I'm still in talks with Kilmarnock too and, while I know there's been a lot in the press about it, nothing has been done," he said.

"My agent has spoken to a number of different clubs. It's not just one club.

"He's been talking to Kilmarnock for the last two or three months, and there's been three or four other clubs who have contacted him to ask about my situation."

Bell, capped by Scotland, is recovering from a hip problem and will miss Kilmarnock's visit to Inverness CT on Wednesday.

"My only focus right now is to be with Kilmarnock until the end of the season and do my best for them," he said.

"I'm injured at the minute and that is what I'm concentrating on."