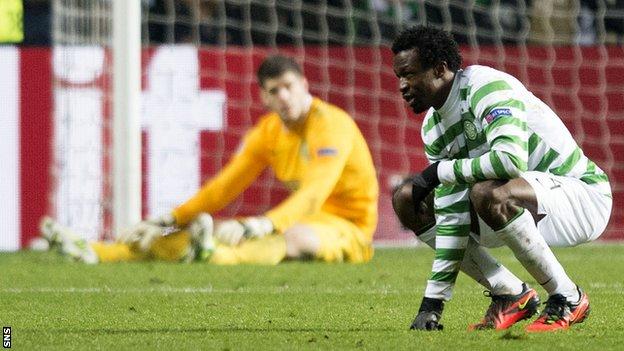 Manager Neil Lennon concedes Celtic "need a miracle" if they are to overcome in the last 16 of the Champions League.

"We know it's a daunting prospect going to Turin at any stage and a 3-0 deficit is almost insurmountable," said Lennon.

"If we can create the kind of chances we did tonight and take them, who knows?

"We need to try and be competitive and try and work our way into the tie but it's going to be a huge ask now."

Juventus striker Alessandro Matri pounced on a misjudgement from Efe Ambrose to score a third-minute goal only for Lennon's side to hit back ferociously in a breathless first half packed full of goalmouth incidents.

The Scottish champions were then caught out on 76 minutes when Claudio Marchisio scored a second on the counter before striker Mirko Vucinic grabbed a third following another blunder from Ambrose.

"We need a miracle. It's the harsh reality of football at this level," explained Lennon.

When you make defensive mistakes at this level, you get punished

"We obviously didn't get off to a great start but our reaction from losing the goal was fantastic.

"For 70 or 80 minutes, we were on the front foot, we were the better side and pressured Juventus into making mistakes.

"Particularly in the first-half, our energy and quality was as good as we've had here for quite a while."

Ambrose was a surprise starter, having played for Nigeria in and not arriving back in Glasgow until Tuesday.

And Celtic's best opportunity to score fell to the defender, who sent a weak header into the turf allowing Gianluigi Buffon to make an easy save.

"We needed a goal and Efe had a great chance with a header," added Lennon. "The tie was alive at 1-0 but if we equalise it's galvanising for us.

"It wasn't to be and the second goal burst the bubble a little bit.

"A few heads went down and we were ragged towards the end. When you make defensive mistakes at this level, you get punished."

Ambrose had a long flight from South Africa after a successful tournament with Nigeria but Lennon defended his selection.

"He was caught for the first goal, it was nothing to do with tiredness," said the manager.

"Maybe later on he did tire but, with Mikael Lustig going off injured, we had no alternative but to keep Efe on because we needed pace at the back.

"You always question decisions in hindsight. Maybe it was a bit of a gamble."

Asked about Ambrose's failure to score from 10 yards out, Lennon also dismissed any suggestion tiredness had a part to play.