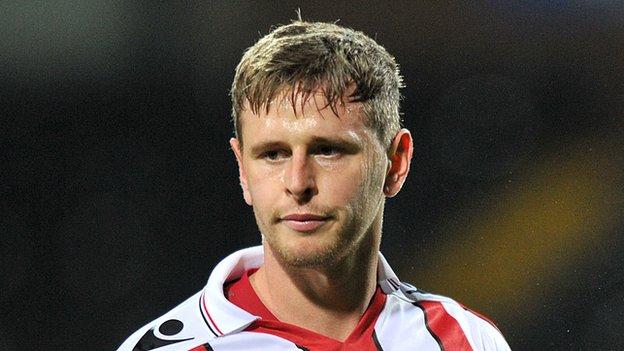 On-loan striker Chris Porter scored on his debut as Shrewsbury Town denied 10-man Tranmere Rovers the chance to return to the top of League One.

Rovers made a bad start, with Liam Palmer sent off for a dangerous lunge on Joe Jacobson in the sixth minute.

Tranmere began the game in disastrous fashion when, after miscontrolling, Palmer was shown a straight red card for his challenge on Jacobson. And it went from bad to worse only four minutes later when Fon Williams fumbled and Porter pounced.

Fon Williams redeemed himself with a brilliant diving save to deny David McAllister's low shot, then Porter missed his kick with the goal gaping after the break before McAllister shot over.

But, after Fon Williams made another fine save to deny Porter, Shrewsbury sealed victory from the resulting corner on 67 minutes when Gayle nodded in with the keeper stranded.

"We were down to 10 men after 10 minutes, and then our goalkeeper who's been fantastic all season - you can't legislate for what's happened there.

"We're disappointed because it's a game we've lost, which on paper we could have won. If we have 11 against 11, I think we win the game."

"Our away record hasn't been too bad of late and defensively we've been reasonable. Our goal difference is now down to -4, which could be crucial at the end of the season.

"We hope not and that we'll have pulled well away from the relegation zone. Only time will tell how big a three points that will be.

"Sometimes it's more difficult to play against 10 men, especially a decent team like Tranmere and on such a tricky pitch. It takes a little bit of courage when you're down the bottom of the table to have the confidence to pass the ball.

"The red card was a long way from where I'm stood at pitch level. From people who've seen replays, it's most probably justified. Joe Jacobson doesn't go down too readily."