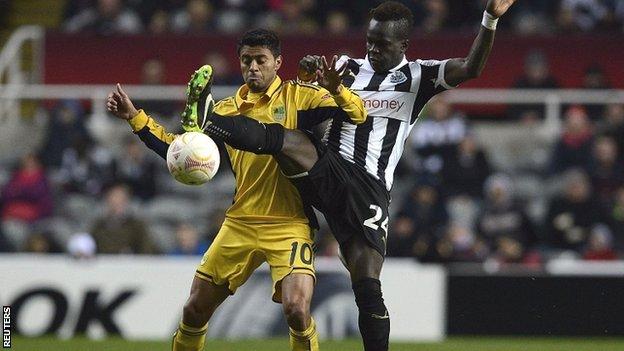 Newcastle were held to a goalless draw by Metalist Kharkiv in the last 32 of the Europa League but will rue several chances and two disallowed goals.

Papiss Cisse twice had the ball in the net, only to be denied by the assistant's flag with each decision looking close.

Cisse could not finish when he was one-on-one with the Metalist keeper or tuck in Davide Santon's cross.

Cleiton Xavier had a header saved and shot wide for the Ukrainian side.

On another night, Cisse could have had a hat-trick, and even in stoppage time he had a back-post header saved by the impressive Olexandr Goryainov.

Although Newcastle will travel to Ukraine for the second leg next Thursday having drawn a blank, this performance will give them hope they can score an away goal.

Having rediscovered their bounce since the January transfer window when boss Alan Pardew signed a raft of French players, this was another display in which Moussa Sissoko shone.

On his European debut for Newcastle, he provided much of his side's thrust with Yohan Cabaye orchestrating from a deep-lying midfield position.

But the duo were perhaps let down by Cisse's finishing touch as the hosts finished strongly against a tiring Metalist team, who were competing in their first game since the start of December because of their winter break.

Sissoko was the more advanced of the French duo and set up Gabriel Obertan, who dragged his shot wide, before the game's first big talking point.

Cisse had the ball in the net after Sissoko squared to him, but Newcastle's new star was incorrectly ruled offside after bursting through the Metalist defence.

In a lively opening, both teams were willing to attack, subsequently leaving gaps in midfield. Xavier went close on three occasions with right-winger Marlos often dangerous as he bore down on Newcastle left-back Santon.

The visitors qualified top of their group in the previous round and, with a vast array of south American talent on show, there was plenty of invention.

Newcastle continued to find space, though. Cisse should have scored when put clean through by Cabaye, but could not beat Goryainov, the only Ukrainian-born player in the Metalist starting line-up.

Cisse, who has scored seven goals this season, was off-target from another Cabaye pass after the break, and soon after Cristaldo shot wide with only Tim Krul in the home goal to beat.

The game became more scrappy at the start of the second period, but around the hour mark Pardew's men began to gather momentum with Cisse denied by Goryainov, and then the assistant's flag when he met Mapou Yanga-Mbiwa's cross to score.

Like Sissoko he was adjudged to be offside, but replays showed the decision was marginal as he converted via the post.

Cisse could not score from several more chances, but on this display Newcastle will travel to eastern Europe with some encouragement.

Newcastle boss Alan Pardew: "Both goals are onside and fundamentally the officials got them wrong. It was a great game, they are good side and we played a great game tonight, we were physical and technical enough and in these games those are the margins.

"I can accept one but twice is tough to take. The law says it should favour the striker and both those decisions were level."