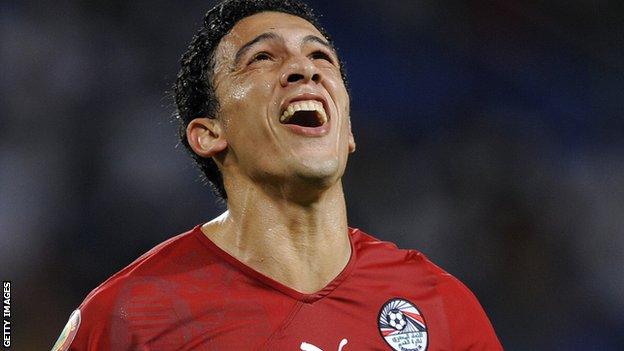 Egypt international striker Gedo has the class to fire Hull City into the Premier League, according to his Tigers team-mate Ahmed Elmohamady.

Gedo scored with his second touch as Hull beat Derby County 2-1 to move into second in the Championship.

Elmohamady told BBC Radio Humberside: "It's normal - he's like this all the time, he scores important goals.

"I've been with him three years in the national team and I know him. I told him when he came on he would score."

After the game, Gedo posted on Twitter: "So happy for scoring my first goal in my home debut ... I love the supporters ... unbelievable atmosphere."

Gedo signed from Al Ahly on transfer deadline day in January, and Hull boss Steve Bruce says Egyptian-born owner Assem Allam was instrumental in overseeing the move, having established links with the Cairo-based club in the wake of the Port Said disaster last February.

"The boy Gedo showed his class," Bruce said. "He's an international footballer and we know he has quality. A big credit goes to the chairman - he's worked wonders to get him here.

"I didn't think it would be possible to get two international footballers on loan, and Ahmed Fathi will be a big player for us too."

Elmohamady, who scored City's winner three minutes from time, believes both Gedo and follow loan signing Ahmed Fathi can be influential during the Championship run-in.

"Gedo is quick, he's strong, his headers are good, he just needs to train a lot of times with the lads to keep going," said the 25-year-old.

"Fathi is a fantastic player. He can play midfield, left-back, centre-half - he's a great player and he will be OK for the next time when the gaffer calls him. He will play and be OK.

If Hull go up Bruce has indicated he would look to convert Elmohamady's loan deal from Sunderland into a permanent transfer, and the winger said the situation would be discussed at the end of the season.

"I really enjoy being here, because we play very good football all season, and I really hope we can keep it going and get promotion," he added.

"It will make everybody happy to go back to the Premier League. I have a contract with Sunderland at the moment so we'll see what happens."