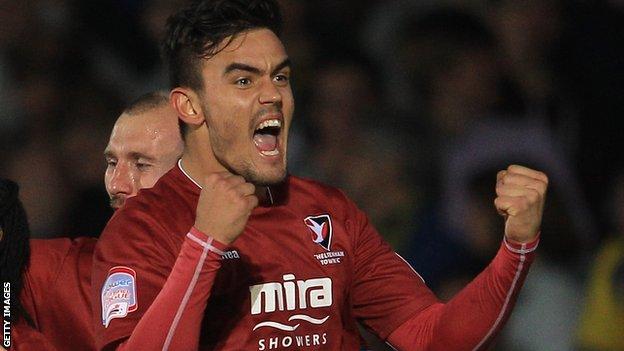 Cheltenham boss Mark Yates has said he wants to keep Marlon Pack after the midfielder's move to Swindon collapsed.

Yates had agreed to loan Pack to the League One club in January, with a view to a permanent switch in the summer.

But the Football League blocked the deal because a takeover at Swindon had not been completed.

Pack, 21, has regained his place in Yates' side and the Robins manager told BBC Gloucestershire: "I'm not sure I can let him go right now."

"If I stay here, then so be it. I'm more than happy to. I've not once said I want to leave

Yates continued: "I want Marlon to be a part of this between now and the end of the season.

"There was a chance he was on his way a couple of weeks ago, and I wouldn't have stood in his way.

"We've had very little contact with Swindon. As a far as I'm concerned I'm not even sure I want to be doing anything."

Former Portsmouth trainee Pack is in his third season at Whaddon Road and Yates was resigned to losing the sought-after midfielder when his contract expired in the summer.

Swindon's offer to Cheltenham for Pack included winger Luke Rooney going the other way, plus £100,000.

Pack agreed terms at the County Ground on transfer deadline day, but the move was put on hold when it was ruled Swindon could not make any new signings.

The midfielder returned to Gloucestershire and was dropped for promotion-chasing Cheltenham's games against Torquay and Bristol Rovers.

But he was recalled to the starting line-up for Tuesday's 2-1 win over Southend, and scored from the penalty spot.

"His attitude has been excellent," added manager Yates. "It must have been tough for a 21-year-old kid to have a move and then for it not to go through.

"But he's been spot on in training and in the way he wants to play for us."

Speaking after the game, Pack admitted he had no desire to leave the League Two club: "As far as I'm aware they are my team.

"If I stay here, then so be it. I'm more than happy to. I've not once said I want to leave. Obviously I want to progress - there would be questions asked of me if I wasn't ambitious.

"But it would be great to get Cheltenham promotion. I'll just have to play it day-by-day from now."