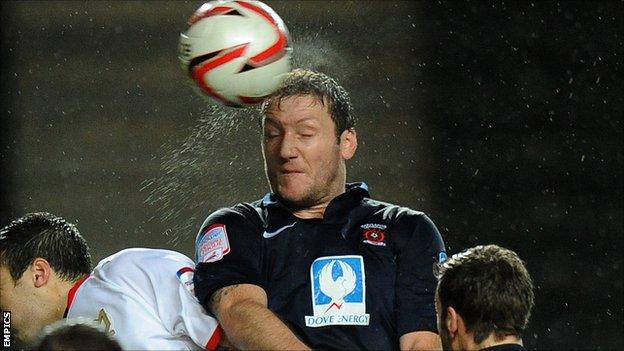 The 36-year-old was tipped to come back against Portsmouth on Tuesday but was left out to aid further recovery time.

"He trained for one day and we felt it was a bit much to go on the bench," Hughes told BBC Tees.

"Hamstrings are terrible injuries, so we'll train him all week and hopefully there will be no reaction."

Tuesday's 0-0 draw against Portsmouth may have proved a disappointment for John Hughes, but Pools' are now unbeaten in four. When Hughes arrived in November the club had won just one game all season, but they could climb off the bottom of League One for the first time since 22 October if they better Pompey's result on Saturday.

Hughes added: "He'll certainly play his part on Saturday - he loves to go and attack the ball and hopefully he'll be there on Saturday."

Howard, who returned for a second spell at Victoria Park in the summer, has made 28 appearances for Pools this season, the last of which came in January's 2-1 defeat by Bournemouth.

Meanwhile, Hughes believes defender Jack Baldwin will benefit from the role in midfield he filled in Tuesday's draw.

The 19-year-old was named man of the match and was close to earning a third win in four for Pools but missed three good chances.

"He's one of the kids I like working with," added Hughes. "He likes learning and he looks you in the eye when you're talking football.

"He's got a big future in the game, he's going to be a top centre-half but there's no harm in him playing in midfield and adding another string to his bow.

"Sometimes he gets beyond the play and we're trying to get him to sit behind it, pick up second balls, feed it wide and not get caught gung-ho.

"His positional sense and reading of the game was excellent."