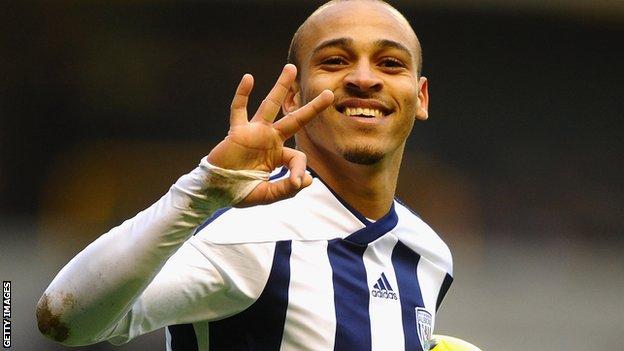 West Bromwich Albion striker Peter Odemwingie has been told that he still has a part to play this season after being recalled to the travelling party for Monday's 2-0 win at Liverpool.

Although Odemwingie was not part of Albion's 17-man matchday squad, boss Steve Clarke involved him by having the Nigeria international sat on the bench.

And he has already been welcomed back into the Albion dressing room.

"The line's been drawn. Everything is fine," said defender Gareth McAuley.

"We're back talking about football. That's how we're looking at it.

"The lads realise that, if Pete is on the pitch, playing well and scoring goals, everyone benefits from it.

"When we're out there together and everyone is pulling together we're a good side.

Odemwingie at the Albion

"We need Pete back on the pitch, playing and scoring goals for us," added McAuley, whose 80th-minute header, his first goal in over five months, put the Baggies on course to complete a first league double over Liverpool since 1967.

After a month of speculation over a mooted move to QPR, 31-year-old Odemwingie made major headlines on deadline day when, despite his transfer request being rejected and the two clubs not having agreed a fee, he turned up at Loftus Road,

He then showed up at Albion's Walsall Road training ground the day after his unauthorised trip to West London, but was told to return the following week and has since accepted a fine of two weeks' wages.

"Pete's an important part of our team," added keeper Ben Foster, Albion's other main hero at Anfield, after saving Steven Gerrard's penalty. "It was an unfortunate incident, but we've just got to carry on.

"When he's on form he's an absolute world-beater, so we welcome him back with no qualms whatsoever."

Albion boss Clarke refuted the idea that being left unused at Anfield was part of his atonement.

"It wasn't an additional punishment," Clarke told BBC WM. "He was involved. That is why he was there.

"He was in the dressing room, he was delighted for his team-mates and was there to support and help them. It's all what being part of a squad is about.