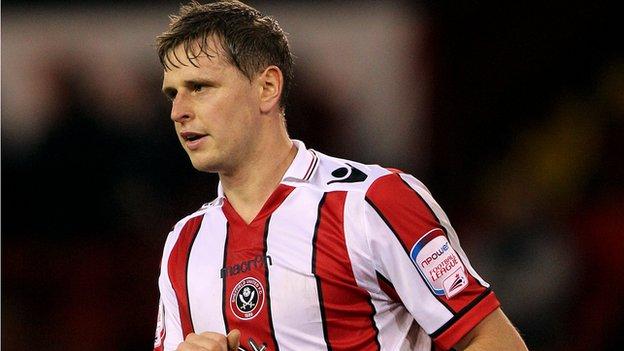 Porter, 29, has signed for an initial month as Town boss Graham Turner bids to turn around a run of just five goals in eight games since Boxing Day.

"We've worked hard to get a striker in, and we're delighted to get Chris Porter," said Town boss Graham Turner.

Hopefully I can continue my goal-to-game ratio. After a few niggling injuries over the season I just need to get that run of games together now

"He's capable of getting a goal or two, holds it up and can bring other players in," he told BBC Radio Shropshire.

"He has a lot of experience. He's played at a good level."

Shrewsbury have lost just twice since the end of November, but are still only four points clear of trouble - and Porter's first assignment will be a tough one, against third-placed Tranmere Rovers, League One's long-time leaders, at Prenton Park on Friday.

Turner already had selection problems up front, with Luke Rodgers not firing on all cylinders, having not scored in six games.

But Marvin Morgan will play only if he passes a fitness test and seven-goal top scorer Jon Taylor is struggling after being replaced at half-time in Saturday's 2-1 home defeat by Sheffield United with a groin/hamstring injury.

Porter was sat in the stand at the Greenhous Meadow on Saturday to watch that game. And, after hitting just two goals in nine starts for the Blades in what has been an injury-hit season, the former Bury, Oldham, Motherwell and Derby County man will make his Shrewsbury debut just three short of a century of career goals.

"Hopefully I can continue my goal-to-game ratio," said the 6ft 1in striker. "I've been back for two weeks after recovering from a five-and-a-half week injury. And after a few niggling injuries over the season I just need to get that run of games together now.

"It's a month to start off with, then I'll just have to take it from there and keep my options open," he told BBC Radio Shropshire. "Hopefully I'll get some goals. That's my main job as a striker."