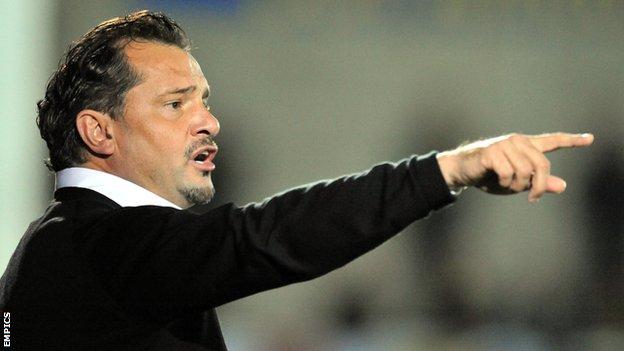 Aldershot Town manager Dean Holdsworth has backed his players to lift the club out of the League Two relegation zone.

The Shots have gone five league games without a win and are currently one point from safety.

He told BBC Surrey: "After 30 games we are in a cluster of clubs who have not been good enough.

"I trust my players and trust them to do the right things. The reaction does not have to be over the top but the players know what is expected of them."

He added: "It's down to me to make changes if I need to and if I can."

Holdsworth bolstered his forward options on Wednesday with the signing of former Bournemouth and Cheltenham striker Jeff Goulding on a deal until the end of the season.

The 28-year-old was a free agent after leaving the Robins on transfer deadline day following a two-and-a-half-year spell at Whaddon Road.

Holdsworth was left frustrated with his side following their 2-1 defeat at Morecambe on Tuesday.

"For 70 minutes we looked solid and were strong and then it comes down to one set-piece," he said.

"All your good work goes out the window if you don't concentrate. Those little things are costing us at the minute. The details make the difference.

"It comes down to trust and you have got to have trust, more than hope, that players will do their jobs.

"Little things are costing us so we have got to really pull together as a group. You don't have time for it to linger inside you - you have to be positive."