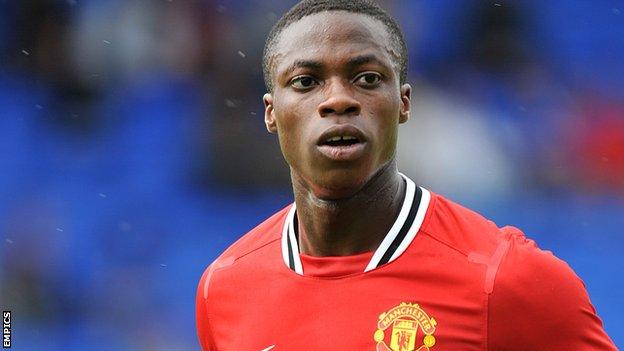 Manchester United striker John Cofie is aiming for the play-offs after signing on loan for League One Notts County.

The 20-year-old has joined for one month and scored on debut in Saturday's 1-1 draw against Crewe Alexandra.

"It's my job to score the goals to help the club get to the play-offs," he told BBC Radio Nottingham.

"I'm hoping to extend the loan until the end of the season if things go well. I just want to work my hardest and help the team win."

The dream is to make it at Man United but it's not the end of the world if you don't. I do hope I have a future there though

Cofie spent the earlier part of the season with Sheffield United, where he scored twice in 16 league appearances.

And the Ghana-born forward thinks going out on loan is vital to his development.

"League One is man's football, it's a step-up from even the highest reserve team level," he said.

"I learnt a lot at Sheffield United and think I adapted to it quite well."

Cofie still harbours dreams of breaking through at Old Trafford but is realistic that he may have to look elsewhere for regular football.

"The dream is to make it at Man United but it's not the end of the world if you don't - I can't say whether my future is there or not," he added.

"All I can do is work my hardest. I hope I have a future there but if not I want it to be at the highest level possible."