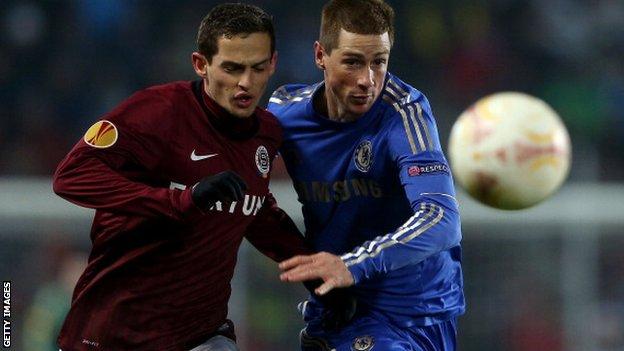 Substitute Oscar scored the only goal in an uninspiring match as Chelsea started their Europa League campaign with victory against Sparta Prague.

Oscar, combining nicely with Eden Hazard, found the bottom corner within 45 seconds of coming off the bench.

The visitors created little but, with the second leg at Stamford Bridge, are in prime position to progress.

The best chances fell to Sparta's David Lafata in the first half, but the striker shot high on both occasions.

A workmanlike performance in the Czech capital ensures the Blues remain on track to become the fifth club (following Bayern Munich, Ajax, Juventus and Barcelona) to complete the sweep of Europe's main trophies.

Chelsea had already created history by becoming the first defending champions to tumble out of the group stages of the Champions League, but goalkeeper Petr Cech called on his team-mates to again ensure the club made an imprint in the annals of European football.

The visitors did not give the impression of a team which had been galvanized by their goalkeeper's talk of history making though.

Hazard and Marko Marin posed problems down either flank in a low-key opening, but Chelsea lacked bite in the final third and the longer the first half progressed the more content the Londoners were to concede possession to the home team.

It was a dangerous ploy and one which would perhaps have caused the fit again John Terry to shuffle uneasily alongside fellow substitute Ashley Cole on the bench.

Sparta, playing their first competitive match since December because of their winter break, blew off the cobwebs when Ladislav Krejci's cross found Lafata. The stretching striker should have put his team ahead but instead sent his effort off target.

The January signing had a chance to make amends when a ricochet inside the box confused the visitors and bobbled his way - but the Czech's radar once again faltered as he dragged his effort wide from six yards.

Two long-distance strikes from captain Frank Lampard and a toe-poke from the ineffective Fernando Torres posed the biggest tests to Tomas Vaclik in the first half, and the goalkeeper had even fewer causes for concern after the break.

A lacklustre Chelsea, top scorers in the group stages of the Champions League, were sloppy in possession, with routine passes regularly finding a maroon-shirted player, and created little.

Other than a half chance for Torres, the only striker available to manager Rafael Benitez because Demba Ba was ineligible, and a tame Lampard header, Chelsea had little to show for nearly 80 minutes of toil.

And until Benitez chose to replace Juan Mata with Oscar it seemed the match would end goalless.

But the lively Brazilian played a cute one-two with Hazard on the edge of the box and raced ahead to place the ball low into the bottom left corner of the net.

It was a strike which ended Sparta's 11-match unbeaten home run in the competition and gave the Londoners a precious away goal ahead of next Thursday's second leg at Stamford Bridge.

Chelsea caretaker manager Rafael Benitez: "Eighteen attempts away is not bad, but we have to be more clinical in attack. The first 20 minutes we were in control. We had some half chances; it was a cross, we weren't there. We were in control.

"After this 20 minutes they were pushing and pushing. The team, as a team, had problems defending.

"We changed a little bit in the second half. I think the concentration of the team was much better, the intensity in defence was much better and then we had more control."